To graduates: take off your shoes

Why walk barefoot, why not listen to your parents, where to look for fear and pain, is it possible to kiss yourself on the back of the head, why being 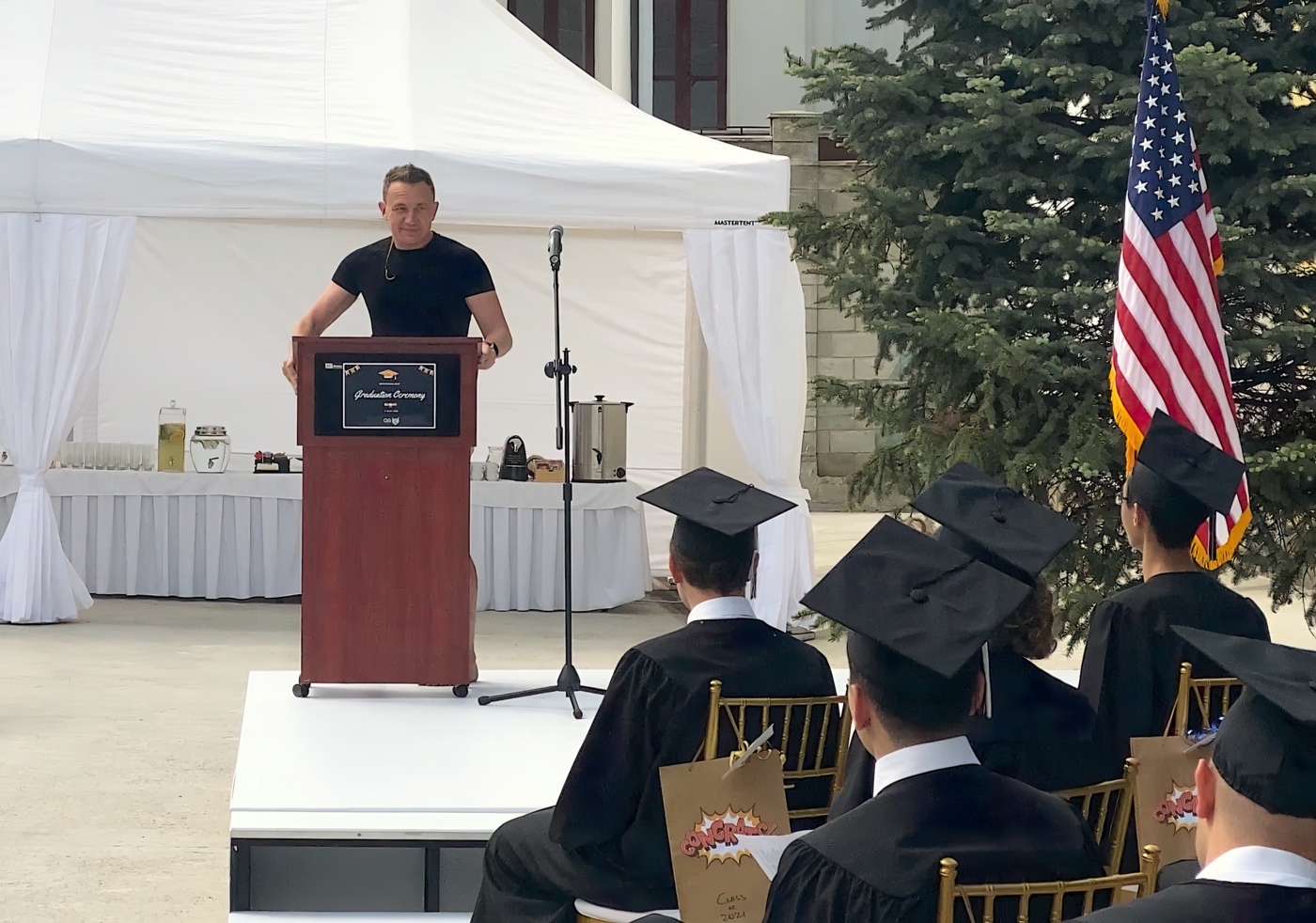 Recently I was invited to speak to the graduates of an American school. For me it was a challenge and, at the same time, a very honorable event. And now, on the last school day, I want to share this speech with all graduates of our country.

The world is changing fast. My generation, like all the previous ones, lived in a world that their parents and grandparents had created. You will live in a world that you will create yourselves. You are probably the first generation of people on earth to whom parents won’t be able to pass on their experience, because it is useless and does not work in your world. It’s sad, but it’s also encouraging, isn’t it? Because now you set the rules of the game yourselves.

The only thing I want to advise you is to walk barefoot.

The worse, the better

It’s very pleasant to walk barefoot on the grass. But you know what’s even more pleasant? First, to walk on the sharp stones. And then, writhing in pain, you put your weary foot on the cool, soft grass, and you get such a serotonin release that you want to scream with pleasure. Try it.

Do you know what’s the most delicious drink I’ve ever had in my life? It’s plain warm water, but after five hours of running through the desert, feeling thirsty. And the best SPA? Thinking of the Maldives Resort? No, it’s a small crooked bathhouse in Siberia, in which I warmed up after a six-hour run at -60 degrees. You really get high after hard trials and hardships. This rule always works.

To feel the taste of victory, you must earn it. You have to walk a thorny and difficult path. Only then can you be proud of yourselves. When you do it yourselves. Leave your parents their money. It’s THEIR money, it’s THEIR success. Start from scratch.

I, for example, dream of my children starting their careers at McDonald’s with a degree from a cool college. By the way, my daughter worked as a waiter’s assistant (yes, there is such a position) in a cafe. And I’m very proud of her.

It’s not cool to have everything. It’s cool to earn it all yourself. My story also began when my parents left for Orenburg and I was left here alone.

My mother cried, not understanding how she could leave her son in a foreign country, without housing, money, work, relatives, and connections. But I was sure that I had to stay and do everything myself. It took my mom ten years to get convinced that I had made the right choice and that I was okay. I had made a lot of slipups, made a lot of stupid mistakes, and walked the rocks in circles toward my goal for a long time. Stumbling and falling. But now I’m walking on the grass and having fun.

Don’t be afraid of stones on your path, they will teach you to appreciate the grass.

Friends, the harder it is for you now, the sweeter the taste of success will be later. In order not to have doubts and regrets in the future, don’t use the springboard of your parents now. Those well-fed and confident in their future usually don’t achieve anything (why should they?), while those hungry and impatient create empires.

There is another reason to choose the rocky path – difficulties will make you stronger. Man is so made to adapt to everything. We humans are not like crystal glasses that shatter on impact. We only get stronger. On the contrary, we become fragile from inaction. This is the main principle of evolution. If you walk barefoot on rocky trails, your skin will adapt and become flexible to bend under sharp stones.

You know, my life principle is “The worse, the better”.

I learned a long time ago that this is the fastest way to the top – the road through Pain and Fear. But it’s also the hardest.

When you overcome pain, you stop being afraid of it and become more self-confident, and boundless self-reliance gives you boundless possibilities. So, the harder it is for you now, the faster you develop and move toward your goal.

Seeking out fear and pain is one of the life strategies that lead to success faster. When I was in an American startup accelerator, I had to pitch in English in front of a hundred investors in New York. I was very afraid of this, because my “Fabulous” English was terrible. Then I decided to improve my pitching skills in English in the most terrible place – the subway. I went underground, put a nameplate around my neck saying “Sonr”, and started walking around the subway cars, making a speech about looking for investments.

At first, I was scared, then I became confident, and when I spoke to investors, I was absolutely confident and got a round of applause. But not the investment. But the video that we shot in the subway became the reason for us to be approached by several partners, who are now helping us to enter the market.

You know, when you walk around the city barefoot, hundreds of people look at you disapprovingly, security won’t let you into stores, in restaurants they look at you like you’re homeless, and the homeless themselves think you’re not normal. At first, it’s very stressful, then you stop caring, and finally everyone disappears. You’re left alone with your own path, and you don’t care who and what anyone thinks about you.

If I had to think of a symbol for the “rules”, I would think of a shoe. You have to walk in your shoes. Many people can’t even explain why. That’s the way it’s supposed to be, those are the rules. But who made them?

People judge what is not accepted, what is unusual and hard to understand. Don’t break out, don’t do anything stupid, don’t be critical, don’t do anything that no one has done before, and live a Normal life. Think about what a terrible word Normal is. Not a freak, not a fighter, not a genius, not a hero, not a villain, not a weirdo. I’m Normal. It’s equivalent to I’m Nothing. There’s no me. Friends, life is too short to be Normal. To me, being Normal is the worst strategy in life.

Do you know what my favorite words are? Impossible, can’t, no one, never.  They sound like a challenge – no one, never, huh?

And my favorite question I get asked that gives me goosebumps of pleasure?

People don’t believe in themselves and I think that others think the same way.

Have you seen people walking barefoot on coals and broken glass? You don’t think they are gods, do you? Then why are you surprised when someone says they ran 230 km in the desert with a backpack? Friends, the whole difference between people is that some people believe in themselves and others don’t. But both can walk on coals. It’s physics 🙂

But in fact, a person can do anything. Become the world record holder or the President of the United States. Fly to the moon and build the largest corporation in the world. Become enlightened or Pope.

It’s just a matter of time and self-confidence.

“You can do anything” is hard to believe. We’re ordinary people and we don’t have superpowers. I’ve heard that many times myself, but I thought it was beautiful words. But I didn’t believe it. It took me years of hard training and a million calories burned (150 kg of fat) to believe that I could do the “impossible”.

Today, I believe that the most valuable thing we have is a childlike belief that you are a person with unlimited possibilities.

You can already achieve everything, well, except kiss yourself on the back of the head. But that’s not certain either.

If you leave the house barefoot, you’re not just going to the store, you’re on an adventure. There are icy stairs and lava-hot asphalt, a shard of magic glass to the right, a mud swamp to the left, but a path of soft grass ahead that turns into a rocky gorge with a huge puddle-sea. You wouldn’t have noticed all this if you walked out in your shoes. Likewise, in life, we often don’t notice the opportunities to be surprised, to learn and try new things, to experience passion and joy, to have new experiences fly by.

I have decided a long time ago that everything I do in this life must be a story that I can tell my grandchildren before they go to sleep. And the main thing is that it must be interesting for them. So, I try to write my life story like a book – chapter by chapter, coming up with interesting plot twists and unexpected turns.

For example, 20 years ago, when the company was just taking its first steps, and there was no money, all of our programmers announced that they were leaving. It was a blow. And you wouldn’t believe it, but when my wife and I got home, we found out that we had had our lights cut off for non-payment.

And here we are sitting in the dark, with only a can of beans to eat, the company almost bankrupt. Bottom point. The reader may be empathizing, what happens next? I look at Vika, she looks at me. We smile and understand each other without words – darkness is the best friend of youth! And here we are in each other’s arms… Intrigue. The reader turns the page – And exactly nine months later … TA-DA! we had a daughter.

Fast forward – My participation in the world freediving championship (air hold diving) was awful – I couldn’t perform well because of the wrong weight. It pressed me to the bottom and I couldn’t swim horizontally. A year of training went in vain. Bottom point – The hero is defeated.  What happens next? We turn the page.

I got mad and decided to make such a weight so it could be customized. A year later came the Lobster, a weight that became a standard in freediving, with which dozens of world records were set. TA-DA!

Hey friend, when you feel bad, know this is the end of one chapter and the beginning of the next. Think about what it should be so the reader doesn’t fall asleep.

I swam across Gibraltar, made VR cartoons, lost tons of money and hit the jackpot, drank and smoked, been arrogant and helped children, got frozen at the North Pole and burned in the Sahara Desert.

I am collecting crazy things for my book. My whole life consists of them. And the most fascinating thing about this process is that you never know which of your collection items will be the last.

Be reckless, play, get into fights, be open to new experiences, be curious, try new things and always say “Yes!”… And then you will write an amazing novel with unexpected twists, which your grandchildren and great-grandchildren will read with delight.

Now you’re out of high school and soon you will start writing a new chapter of your adventure novel – start it off excitingly, like a blockbuster. Start it off so that readers will forget about sleep and popcorn.

My friends, don’t listen to anyone, not even your parents. They love you, and they want you to be safe, that’s why they put your first shoes on you 17 years ago. They don’t know what’s best for you, no one does. Not even you. So, question everything I’ve said here.

Take off your shoes more often and walk barefoot.