Is one ban coin worth a statue? In what direction is Moldova 's coat of arms oriented? How much does 1 ban cost? Where did the billion go? Whom you should not believe on April 1st? How much money to collect for the city anniversary?

On 13 October 2016, at the intersection of Banulescu-Bodoni and Petru Rares streets (next to ASEM University), appeared  a monument dedicated to the smallest unit of Moldova’s national currency – the 1 Ban. 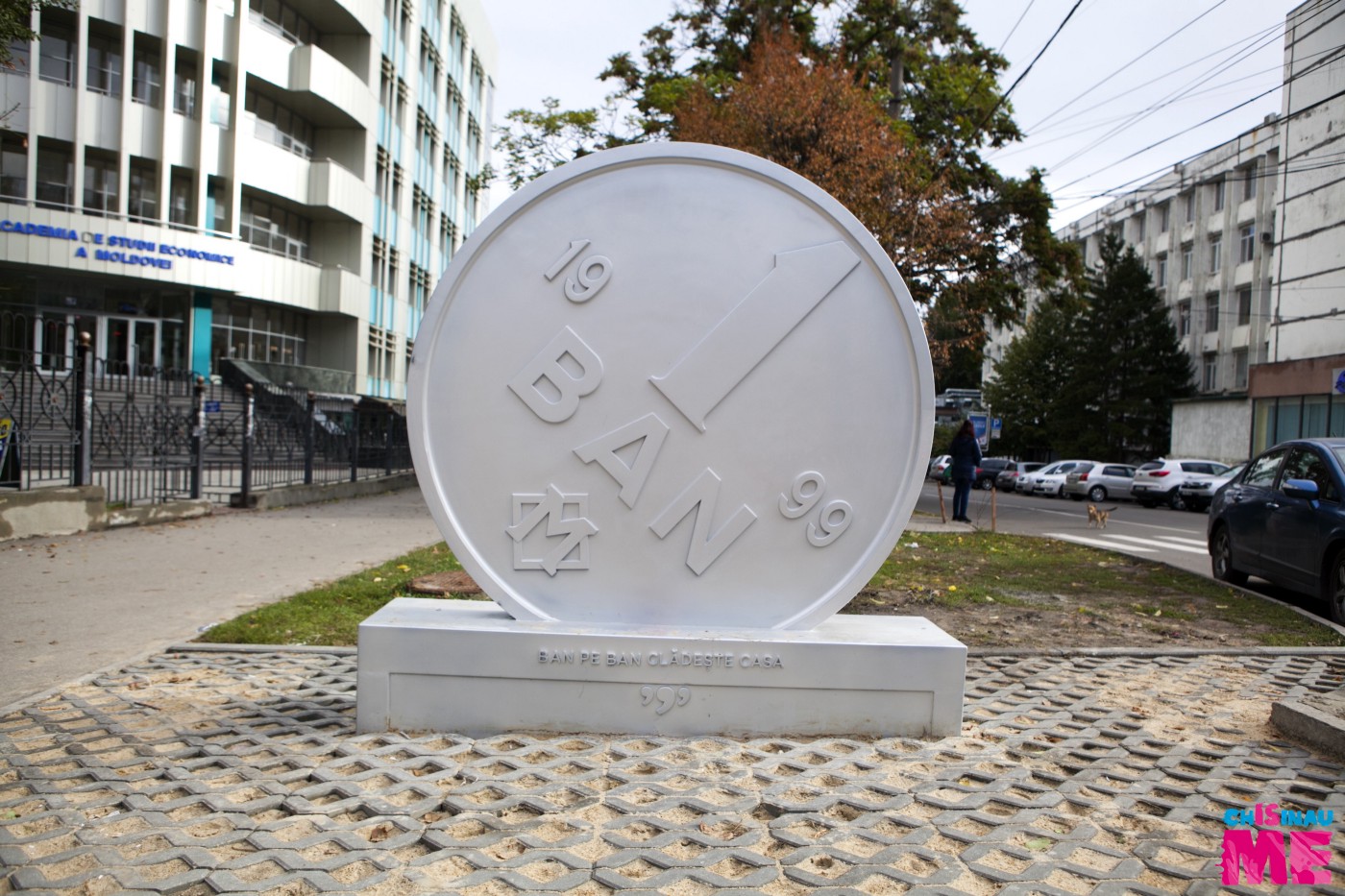 And it started a year and a half ago. And here’s how.

The thing is, we have a tradition in our company – we do some sort of surprise for the company’s birthday. And our birthday is on 1 April, and this is no joke. And so it was March 2015. But everyone is only thinking about preparations for the first international marathon, which will take place on 26 April. And the surprise is forgotten.

That’s not the way things are going to go. No excuses, let’s think! And then somehow by chance, in the smoking room, an idea comes up:

The leu has been the monetary unit of Moldova since 1993, when it replaced the kupon that was then in circulation. A ban is one hundredth of a leu. All coins, except for 50 bans, are made of aluminium. At the same time, one Ban is already out of circulation in Moldova. The coin has not been produced since 2006.

The idea is strange, but we like strange things 🙂 That’s why the idea went into production. Previously in Moldova the monuments to national currency have never been placed, although this trend is quite popular in the world.There are monuments to JPY, EUR and USD in Madrid, the capital of Spain.  A peculiar cult of money is also maintained in Canada – there are many monuments to coins. In addition, there are money installations in Latvia, Russia, Germany, Kazakhstan, Australia and many other countries. 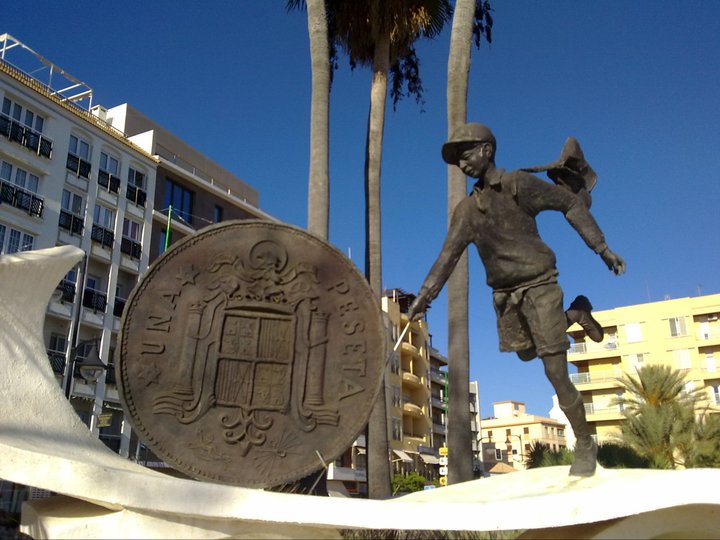 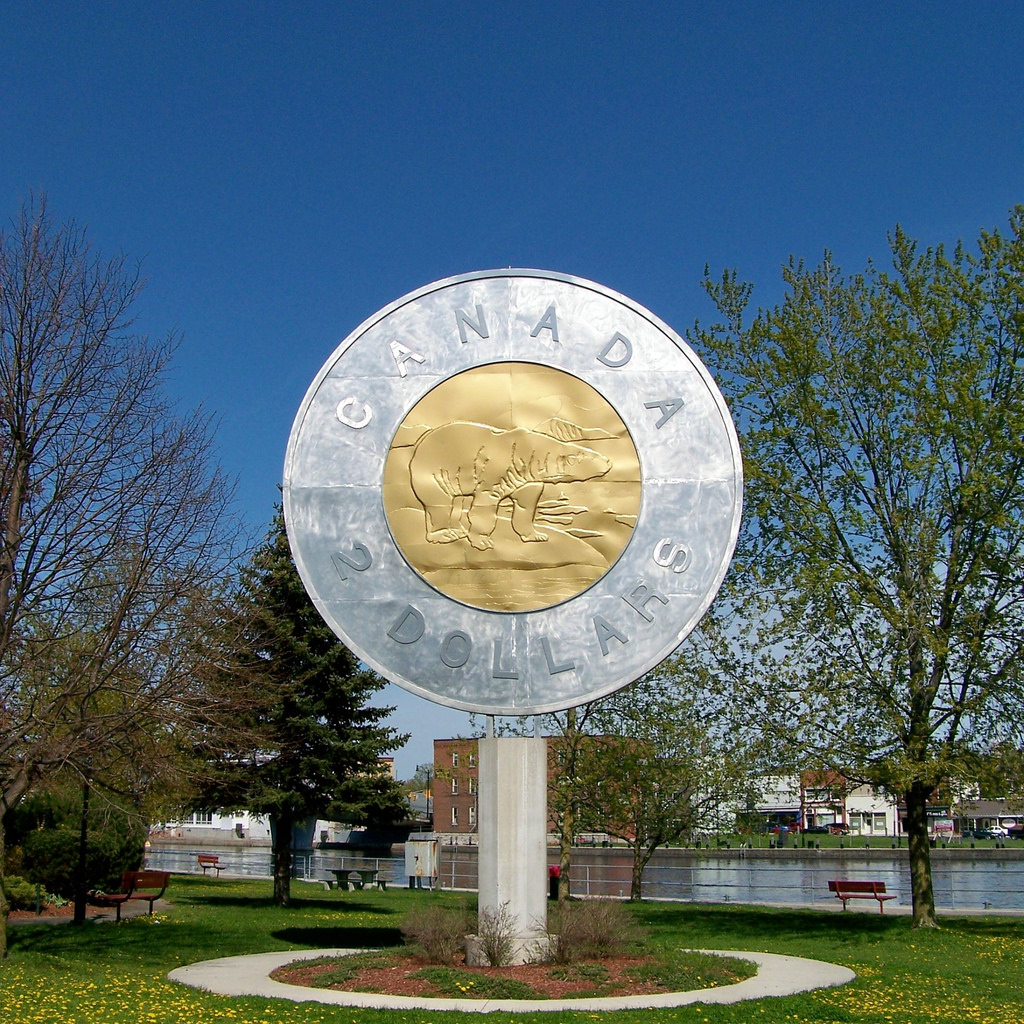 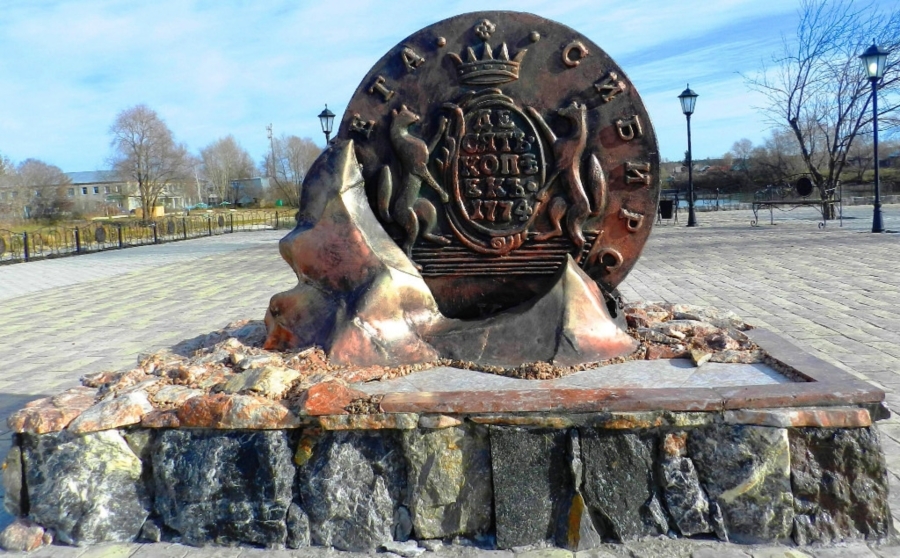 In short, Moldova needs to have its own coin, too!

The first of April was two weeks away.  But even in this short time we found people who dared to do this work. The concept of the project is as follows: a coin inserted in a hole in the ground. It will look like the earth is a piggy bank.  Something like that. And the size of a coin in diameter is 170 cm. 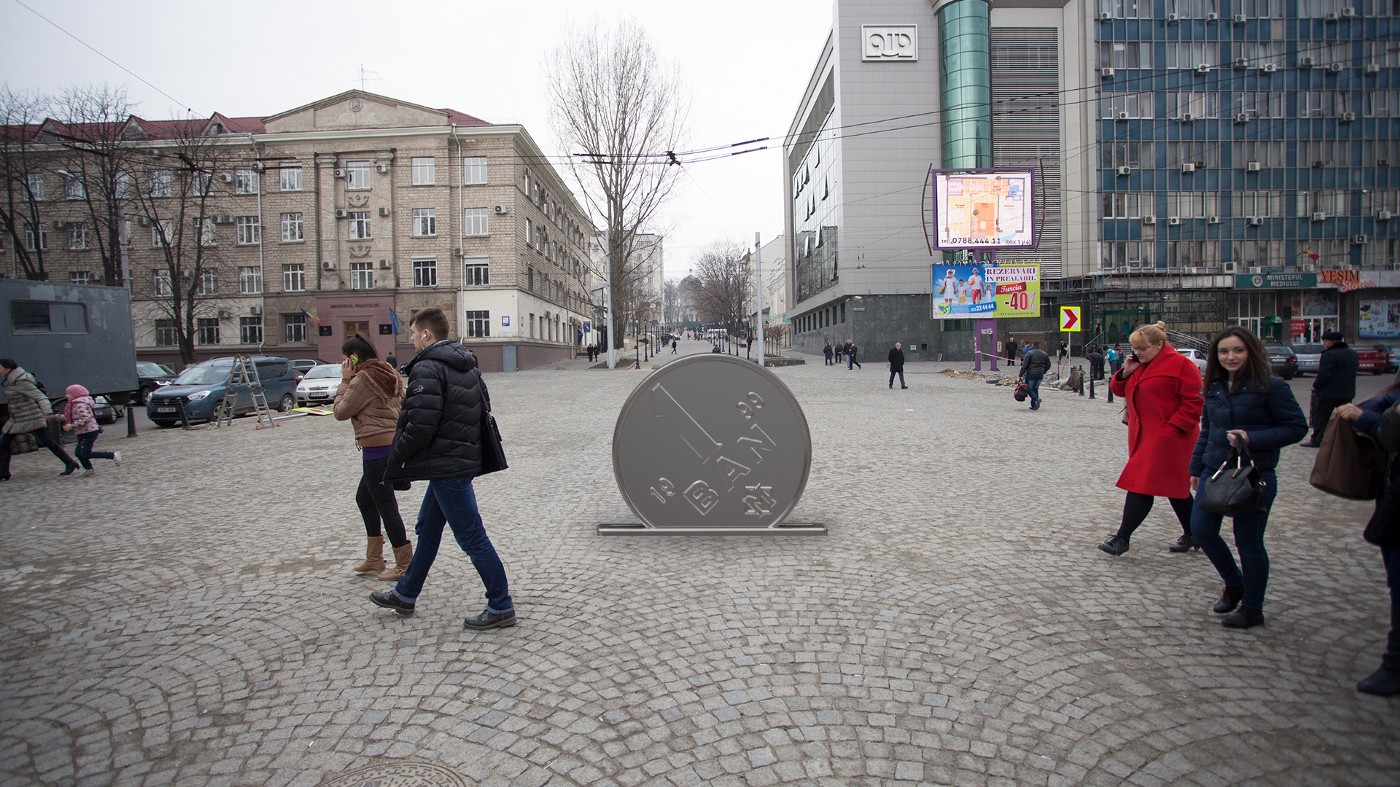 And the work began!

I had to break proportions a little and deliberately change something in a coin – reverse is turned on 180 degrees. Well, there are a few thoughts. First, didn’t really want to reverse the coat of arms of Moldova :).Well, and secondly, I wanted to add an unusual detail. According to numismatists, to find a coin with reverse turned upside down like that is good luck. 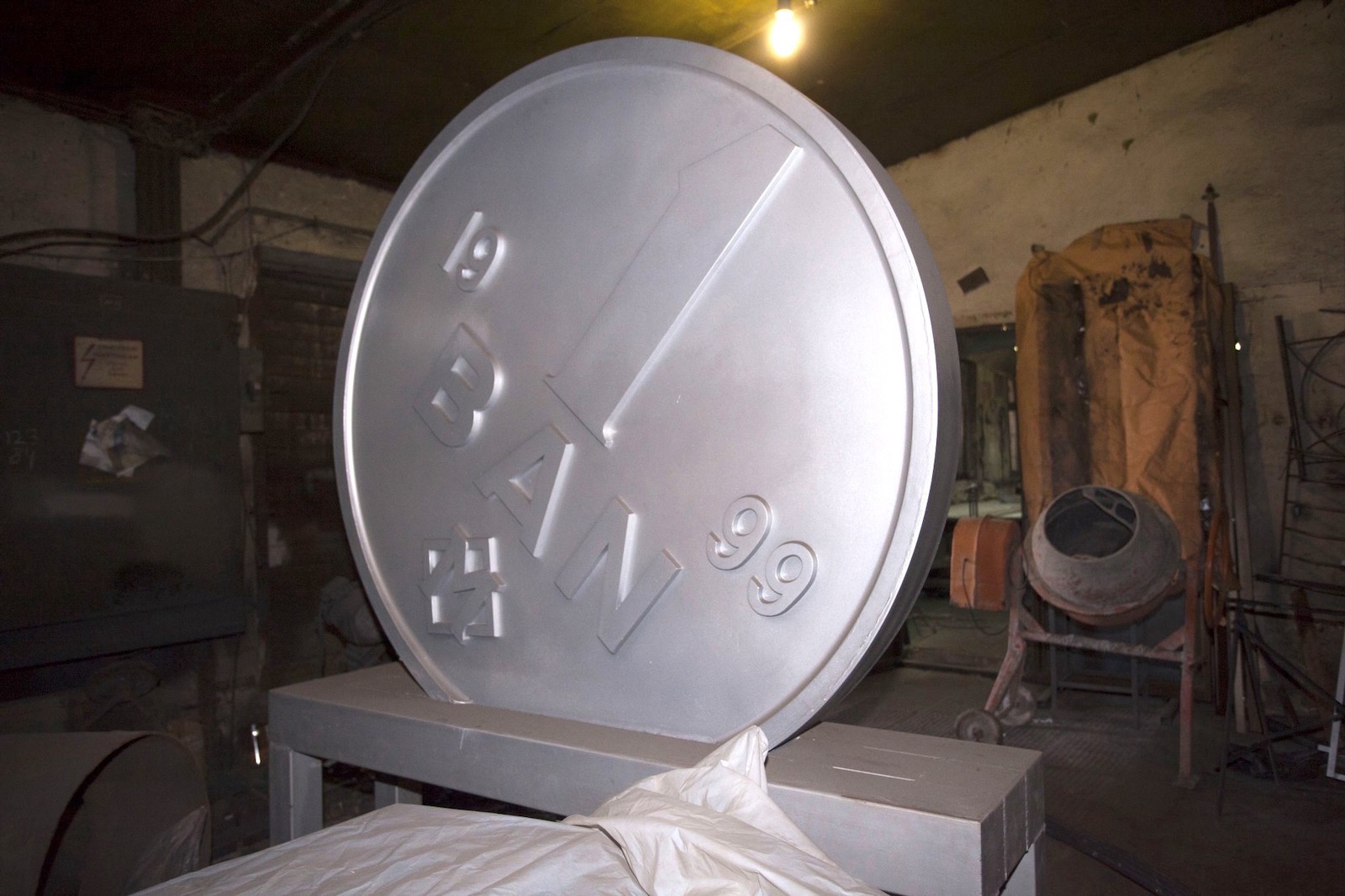 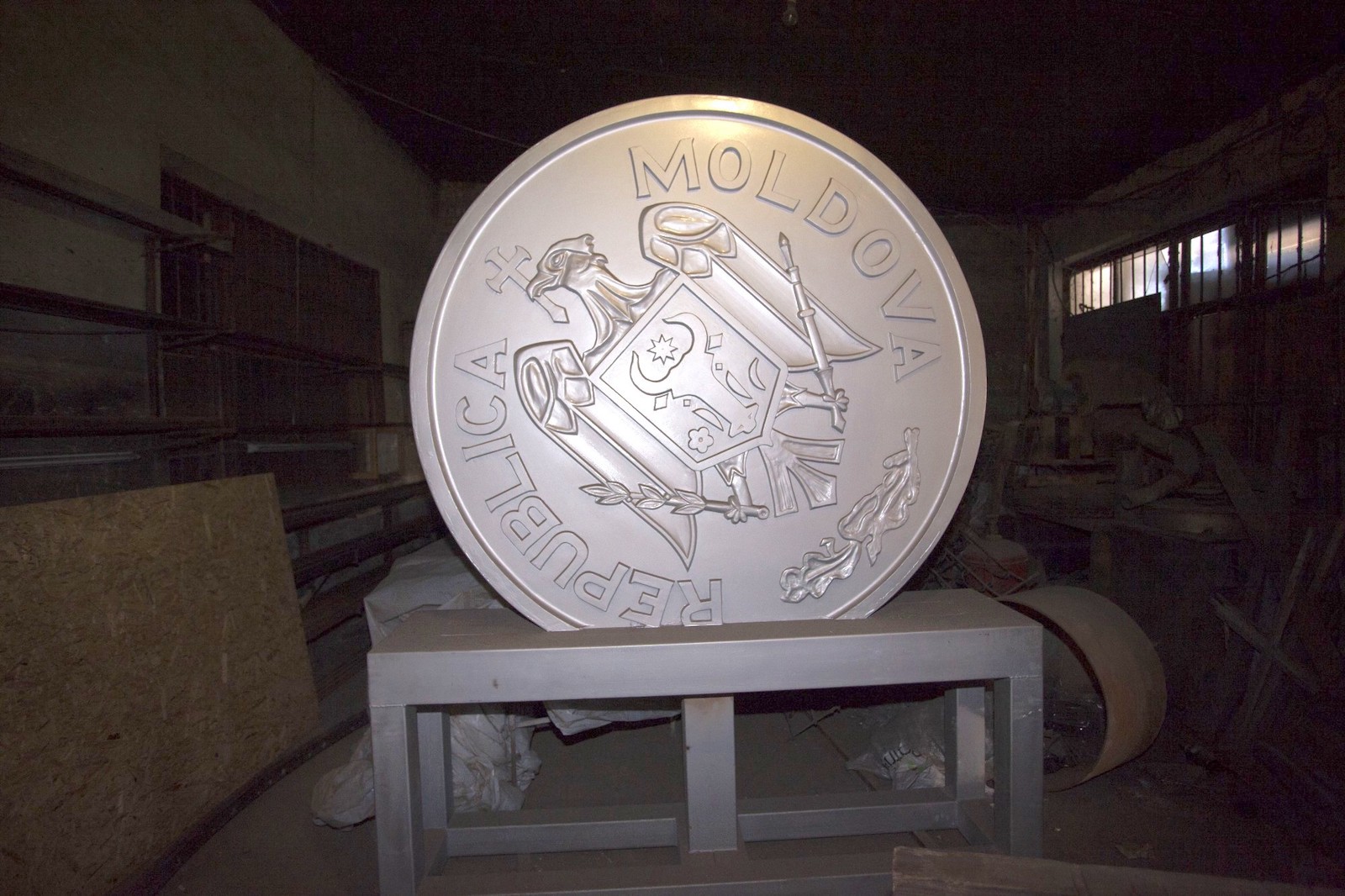 So, the monument is ready. Now we need to install it. The site where the pedestrian street of Didiordica begins, on Grigore Vieru Boulevard, was chosen as the installation site.

Only the city authorities for some reason did not support our idea.

And… they forbade us to put the “Ban” there. Because in some perspective a bust of Grigore Vieru – a great Moldavian poet – will have to appear there.The news was great, only so far (February 2022) the monument to our talented countryman is not there.

Anyway, we won’t be able to put up the monument by the first of April this year, but who says you need a real coin to make a joke? We hold an urgent meeting and decide to play a trick on Chisinau residents – with 3D designers and copywriters we make a fake video with a virtual coin.

And in order to confuse sceptics, we post a video of a real banutsa in the workshop.

The news blew up the Moldovan internet – everyone was arguing about whether it was true or not. And we, drinking champagne, grinned and congratulated each other on our birthdays!

In the evening, we were caught out and we admitted it was a hoax,
Happy April 1st, friends! 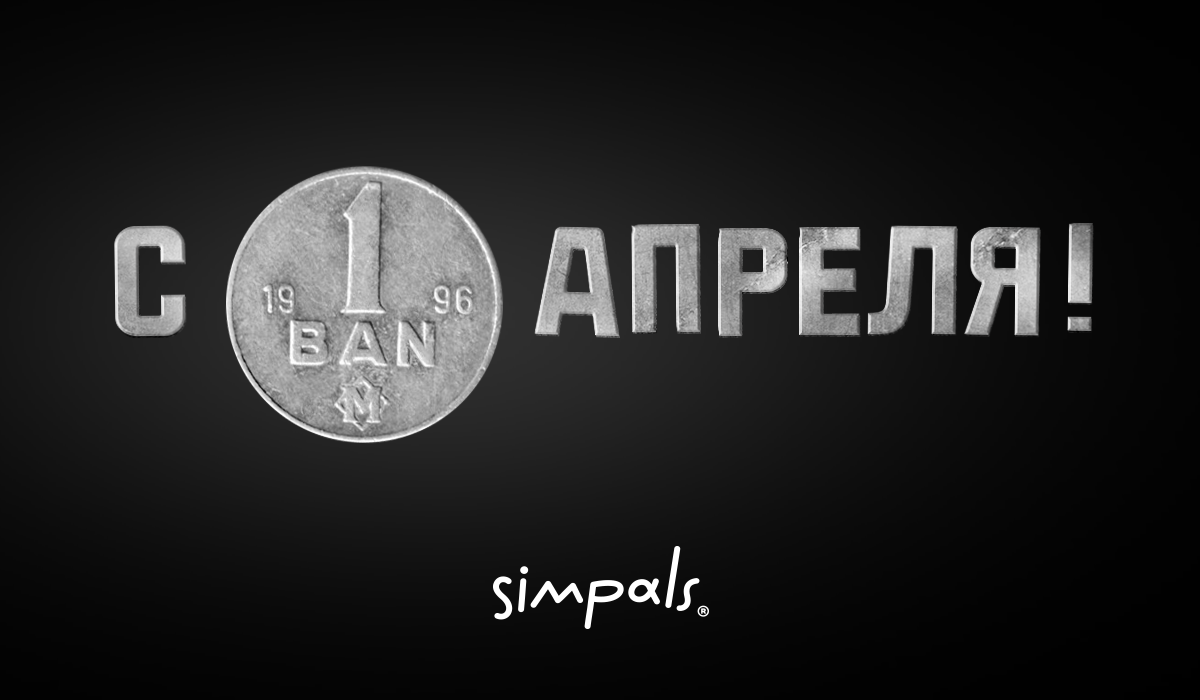 But we were not going to give up – a monument to the coin had to be erected! And so, after a year and a half, when we went around to various state institutions, we managed to get permission to erect this monument. And now, on the occasion of the 580th anniversary of the city of Chisinau, we are pleased to present a monument to the Moldovan national currency – the Monument to the 1 Ban.

With it we want to tell you that 1 Banutsa is the smallest contribution a citizen can make to the development of his or her country.By erecting this monument we can safely say that it is very important to do for your country what you can. One can paint a tree, another build a house, another build a school or a stadium. And you have to stop waiting for someone to make our life happier and better: the government, investors, the EU or Russia.  It does not matter.We must improve our beloved country, beloved city, beloved region ourselves.

It is very, very important.

PS: A year later, despite its true significance, people nicknamed the installation

Monument to the Missing Billion 🙂

What can you take from the people, like a little child – what’s in their head, they say and do …