How "Death Sails" was made. The pirate, death and fishing.

How are cartoon characters made, what's more brilliant in a pirate: gold or his mind, what day of the week is Death born, what makes mud jumpers so surprised, and what does a testosterone donor look like?

If you think you can have some rest and drink some lemonade after finishing a project, you’re wrong 🙂 Why? Because exactly at this point, the producer comes in, and says that there is no time to rest, because we must start making another animated movie! The very same thing happened with us: we just finished the first cartoon and immediately started working on the pre-production of the second one.

As we mentioned earlier, the pre-production starts with the idea. But at that time we didn’t have anything, not even the idea.

Firstly, we had to create an environment which would suggest the following: “Death has to be somewhere around here”. In addition, we wanted to design an appropriate location for Dji, which had to involve an “enclosed” space, such as the ocean. Well, because first of all, everything had to be limited by the surroundings, but the surroundings didn’t represent anything 🙂 Secondly, creating the ocean was a challenge, because it is very difficult to animate great amounts of water and to make them as real as possible. So the idea fired our imagination! 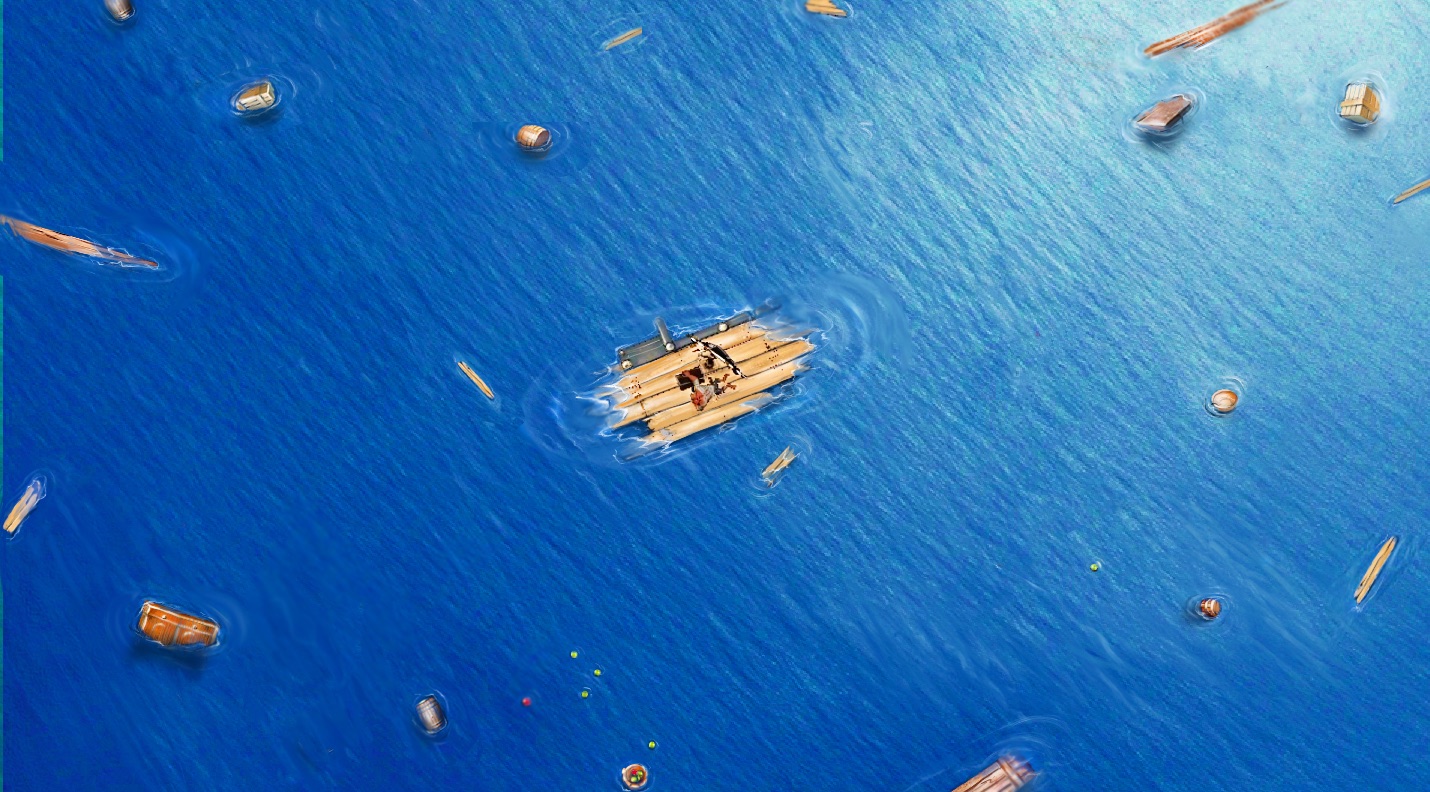 Because none of our team members possessed a degree in piracy, we had to derive inspiration from outer sources, such as: movies, books, novels, videoclips, etc.; we even made a phone-call to Somalia! Two words: long preparations.

So here we have the plot. The ocean. Not so long ago, a shipwreck occurred. Among the wreckage, boxes, apples, empty rum bottles (well, what else could there be?!) and a parrot cage (which flew off to find the captain), a small raft floats (like in Yuriy Loza’s song “The raft”). A pirate, who’s dying of thirst, lies on the raft (there has to be at least one survivor, who may retell this story) and a chest of gold is placed there, which is absolutely useless at this point.

Dji is a character which has specific traits and charisma. He is very curious, naive and clumsy. There is nothing you can do about it. This is the way (probably unlucky) he came into this world. In other words, Dji is the total opposite of the old gloomy death with a scythe.

Everything would be fine, except for one thing. All of Dji’s traits prevent him from doing his work: taking the soul of the dead. But Dji is a loser and a double-trouble. It happens to everyone. What a pity, but he is to blame himself…

By the way, Dji didn’t undergo any changes. We described him in the other post. 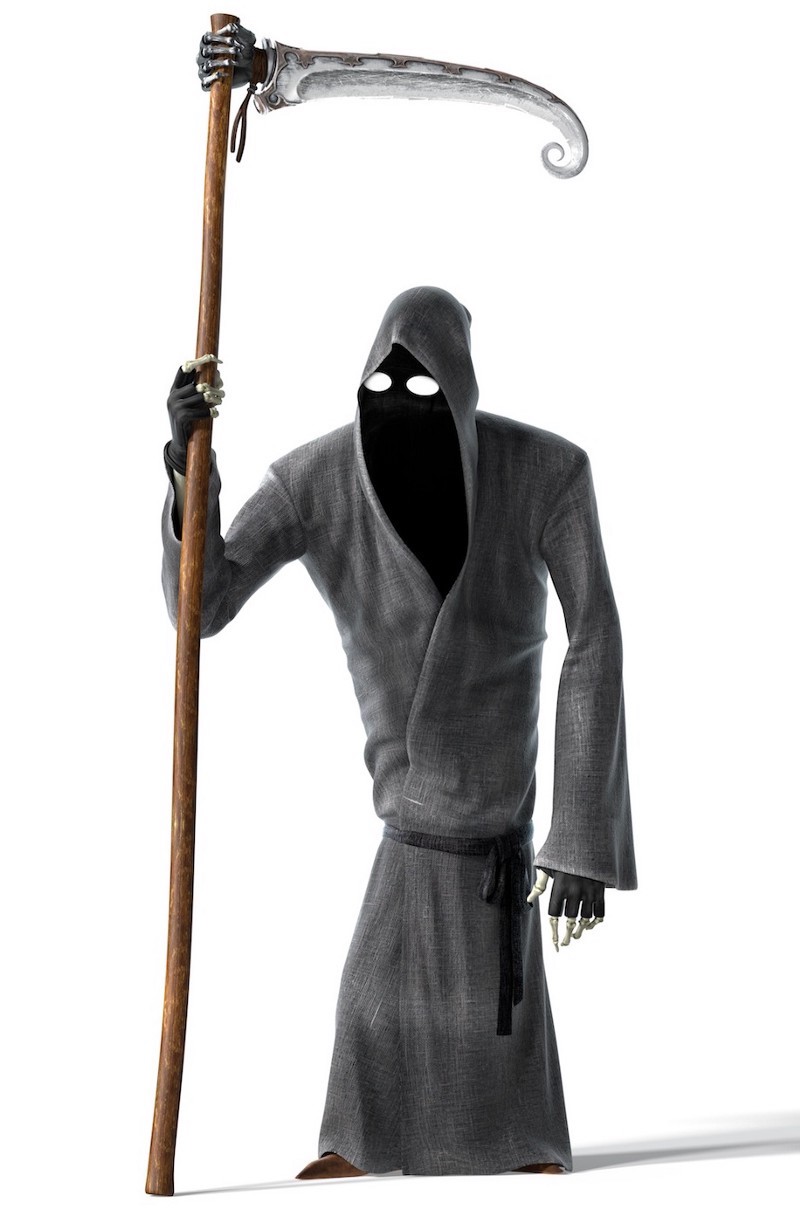 If all is clear with Dji, and we know that he is a complete character who is not aging, we may go on and create a new character – the pirate. Nobody (from our team) has ever met a real pirate, and it didn’t make any point to design the pirate to look like one of famous characters (like Jack Sparrow) either. We studied the literature again, but the pirates we found in the books had hats, wore camisoles and sometimes wigs. We wanted none of that. So we started sketching the character using the production designer’s imagination.

As for the body, we quickly found the option which fitted the whole team. The pirate had to have a large torso, strong arms, but very weak legs. And we liked it. It seemed like a “testosterone donor”.  We even drew a tattoo on his arm, just for fun. 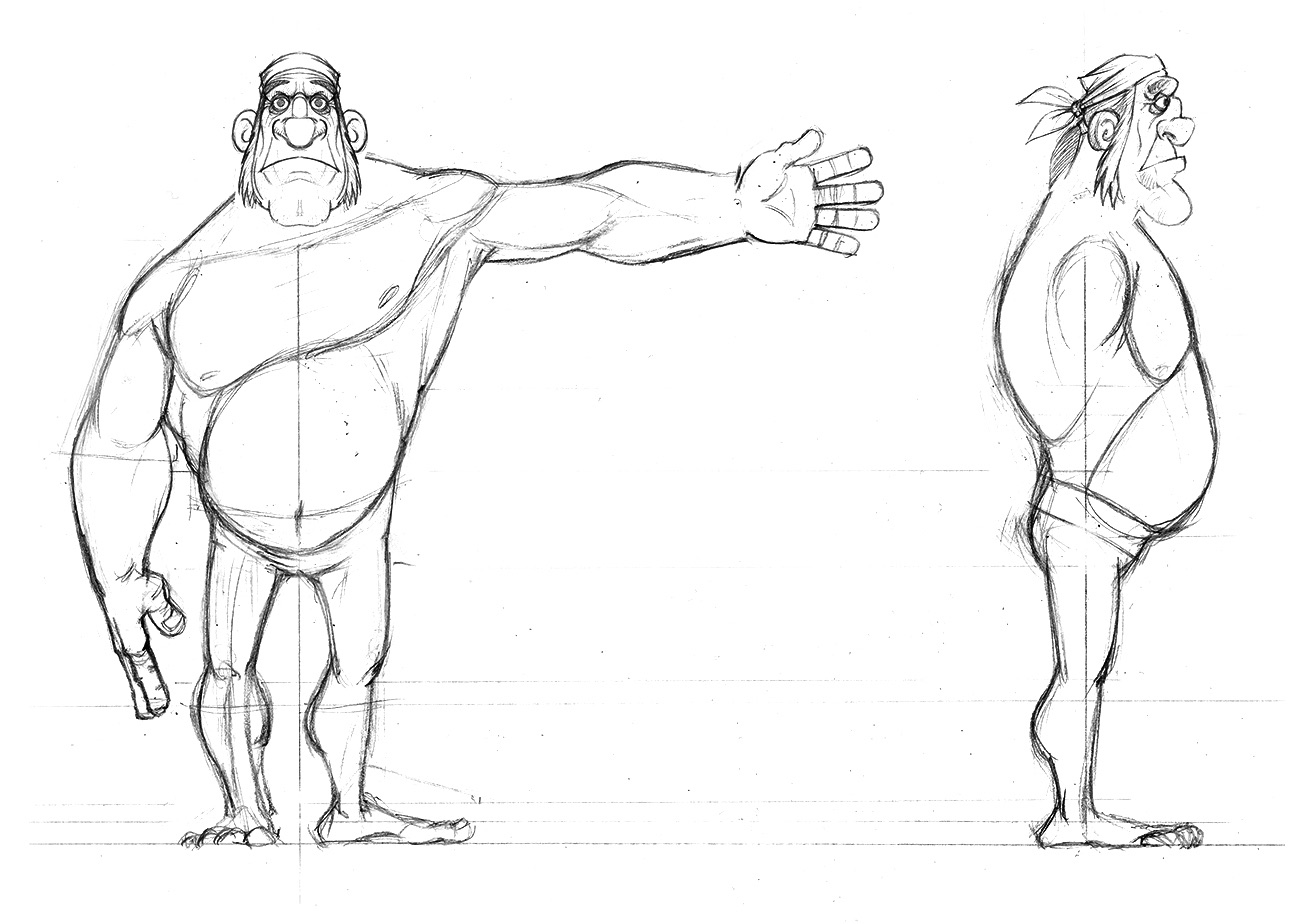 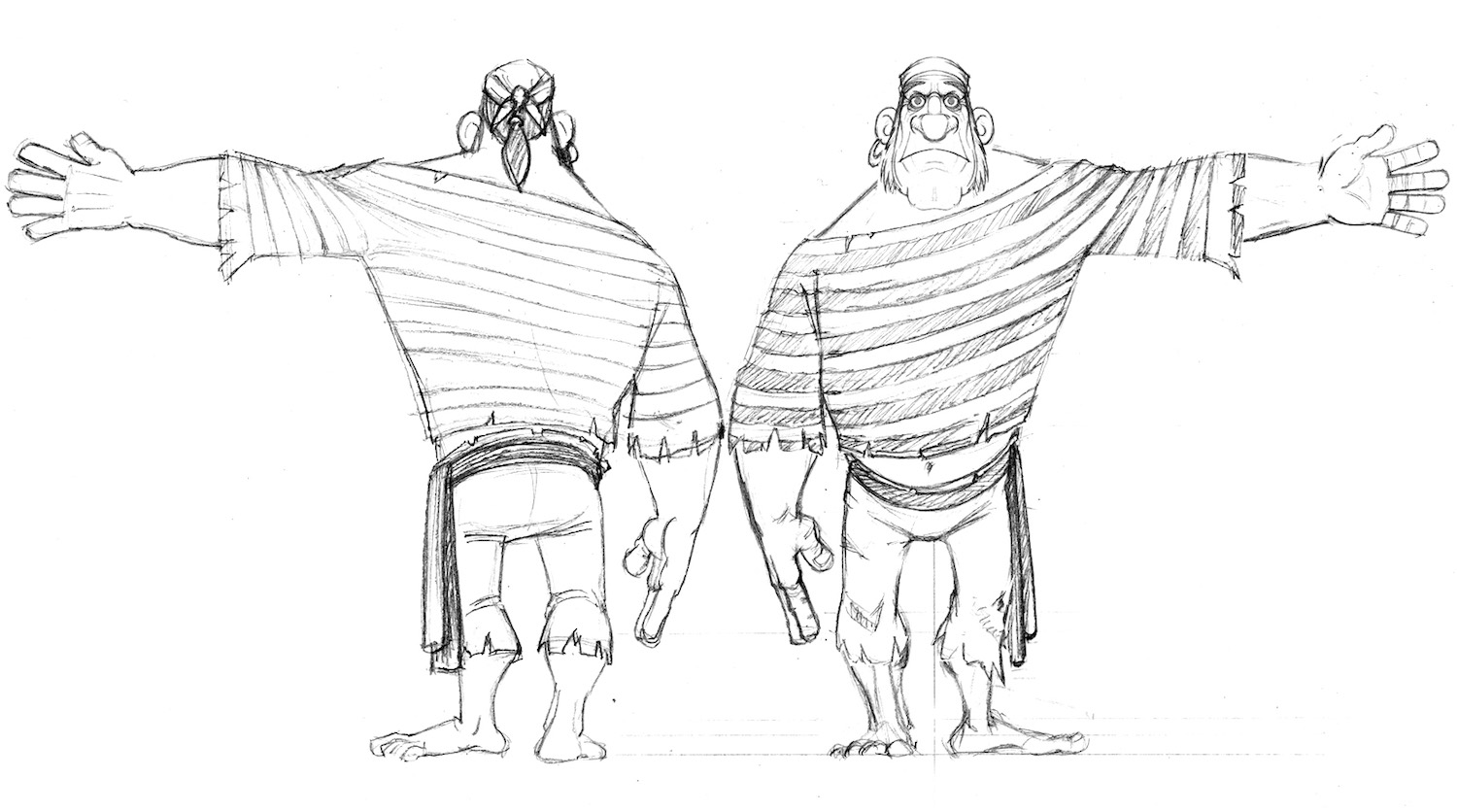 So, what face a pirate should have? Well, if he’s a pirate and he survived the shipwreck, he must have a harsh, tough and fearless look. Therefore, he has to be gutsy and unafraid.

Before we found the perfect option, we had to sketch 10-12 versions. It was hard to find the golden mean, because he either looked like a maniac, either like an anemic. As a result we designed a redheaded skipper (no offense, redheaded people!). In a word – a cutie!

Most of the cartoon, the pirate lies on the floor and guards the chest. His body doesn’t move, but his face does a lot. He shows fear, amazement, anger and joy. Sam, the pirate, didn’t express as many emotions in his entire life, as the production-designer  made him to. 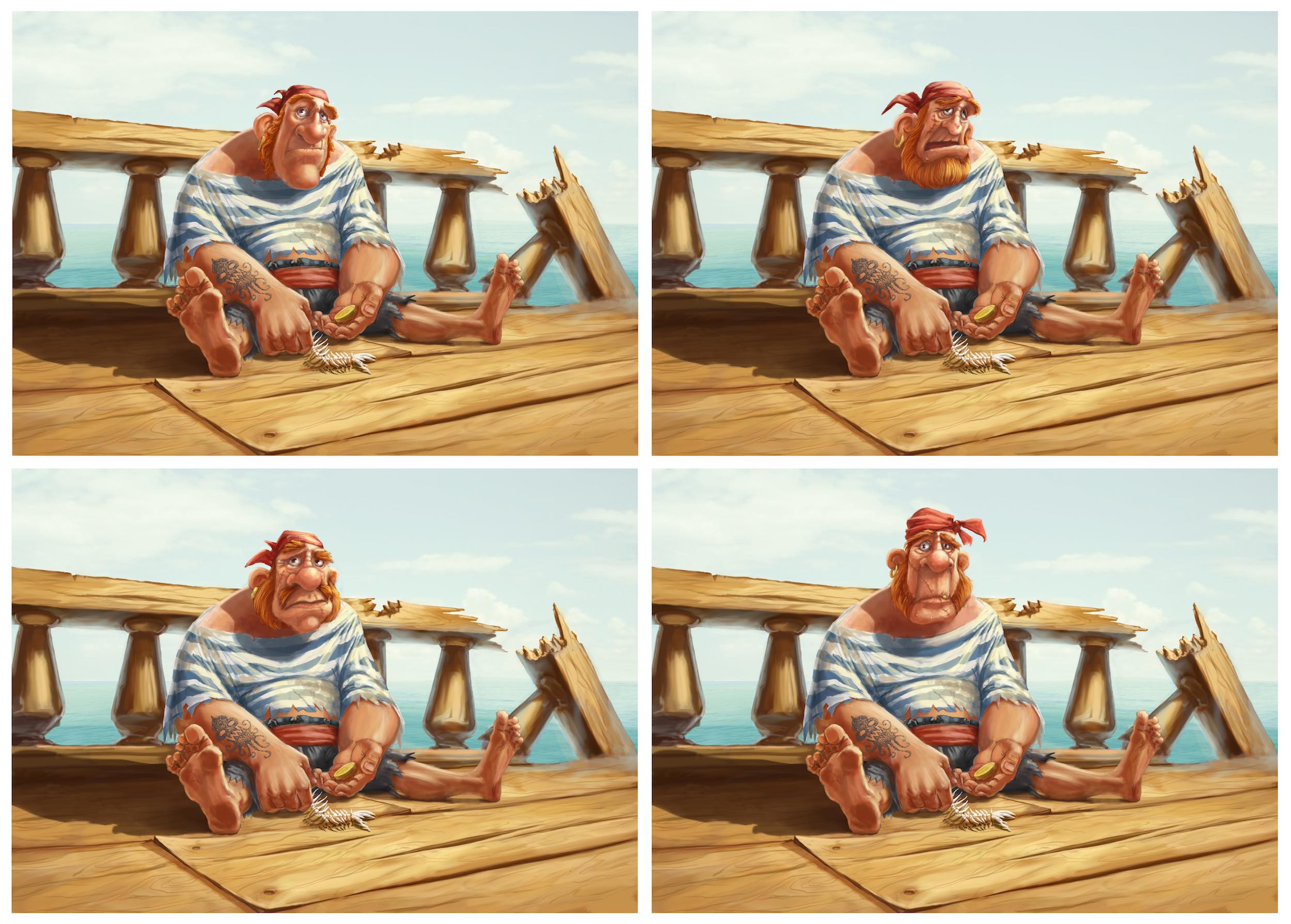 After the face was approved, we refined the beard and the nasal hump.

Typically, the production designer “tells” each character a couple of personal stories: firstly, a few jokes, then information about the salary, politics and his life story. In this way, the character changes facial expressions, and the artist is able to draw the emotion spectrum 🙂 This is how the run-in of pirate’s feelings looks like:

Sam likes to drink, as all pirates do. Nonetheless, we made Sam’s health and torso very strong. Sam is extremely greedy. He survived the shipwreck, and instead of saving water bottles, he saved the chest of gold. Maybe the pirate is not so bright, but he certainly is very strong willed! And his greed has no limits!

In the end, Sam shall display a pirate trickery, but more on that later.

One of the most important characters of the cartoon is the big fish. We decided it had to be a demersal fish. The real prototype was the mudskipper. In fact, the mudskippers are shocked to hear this news: 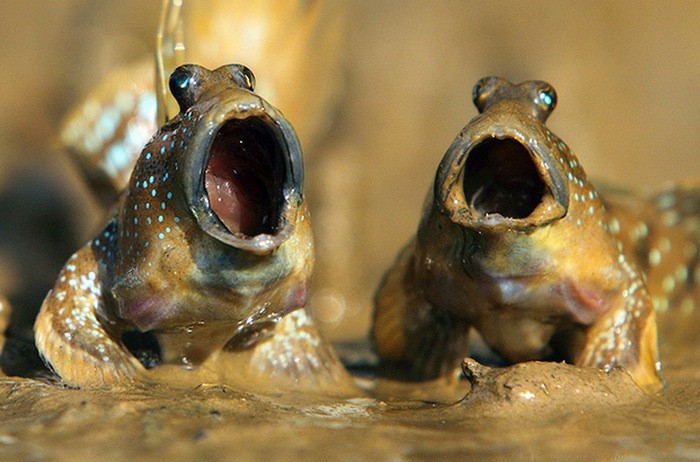 In order to understand how the demersal fish looks like, you have to think like a demersal fish 🙂 Anyway, everything seems like a classic detective scenario.

As a search result, we found 25 options and we chose one of them. We amplified its size and it turned out into something between a whale and a reef stonefish.

Our fish, call it Fish (a popular name in the fish world), is very lazy, waits in silence for the perfect moment to catch the prey. It lures the victim with a fin, pretending to be a small fish. The fish that represents a blend between a whale and a reef stonefish looks like all 25 options mixed together. 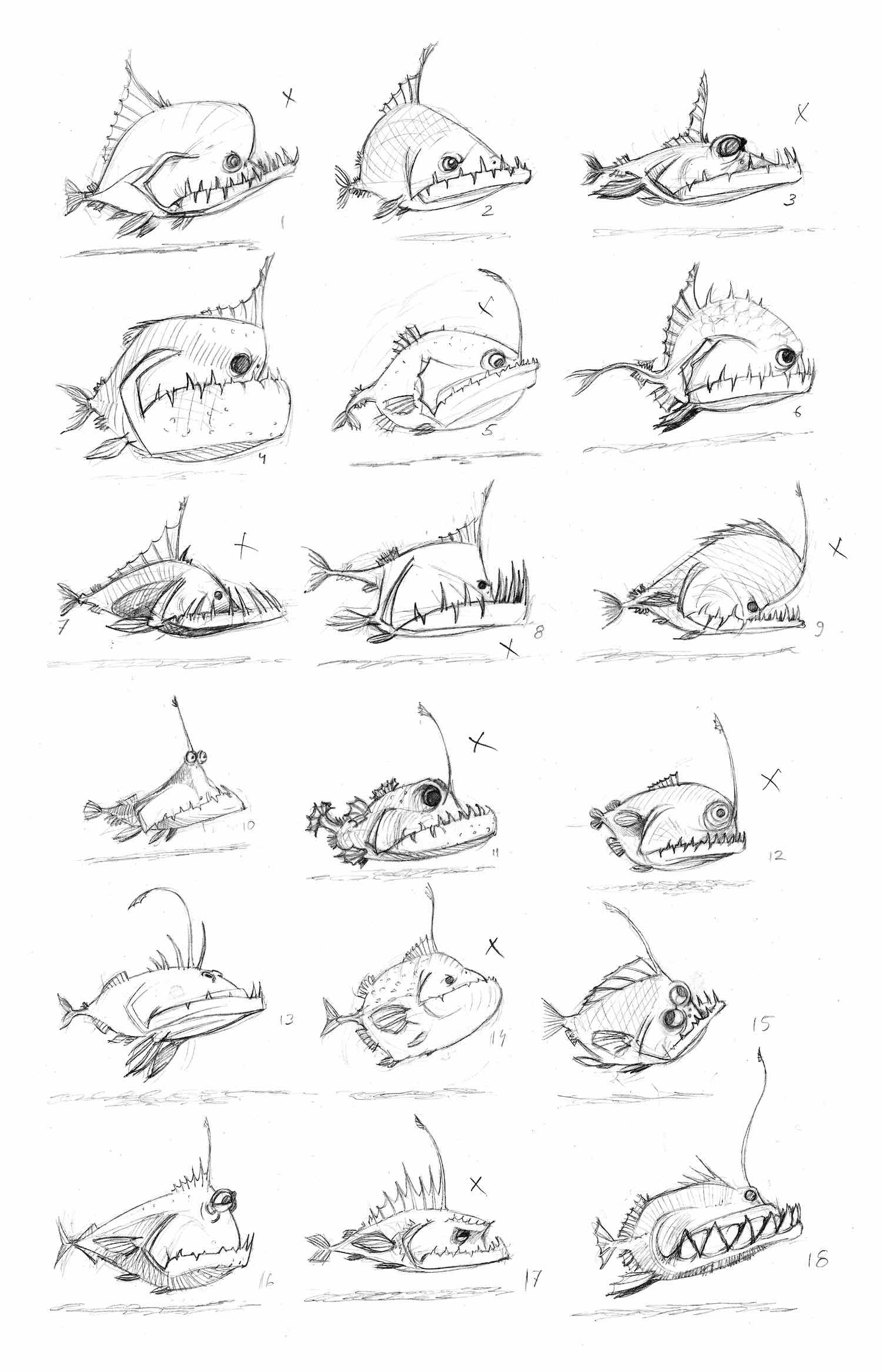 Version No. 2 and No. 10 made it past the filter. By the way, the production designer would be very glad if you took a closer look at the option No. 14, because in his opinion, it looks similar to Sam, the pirate. In the beginning this fish had a red beard.

After this, we started looking for the fitting colour, and, finally, we found it: 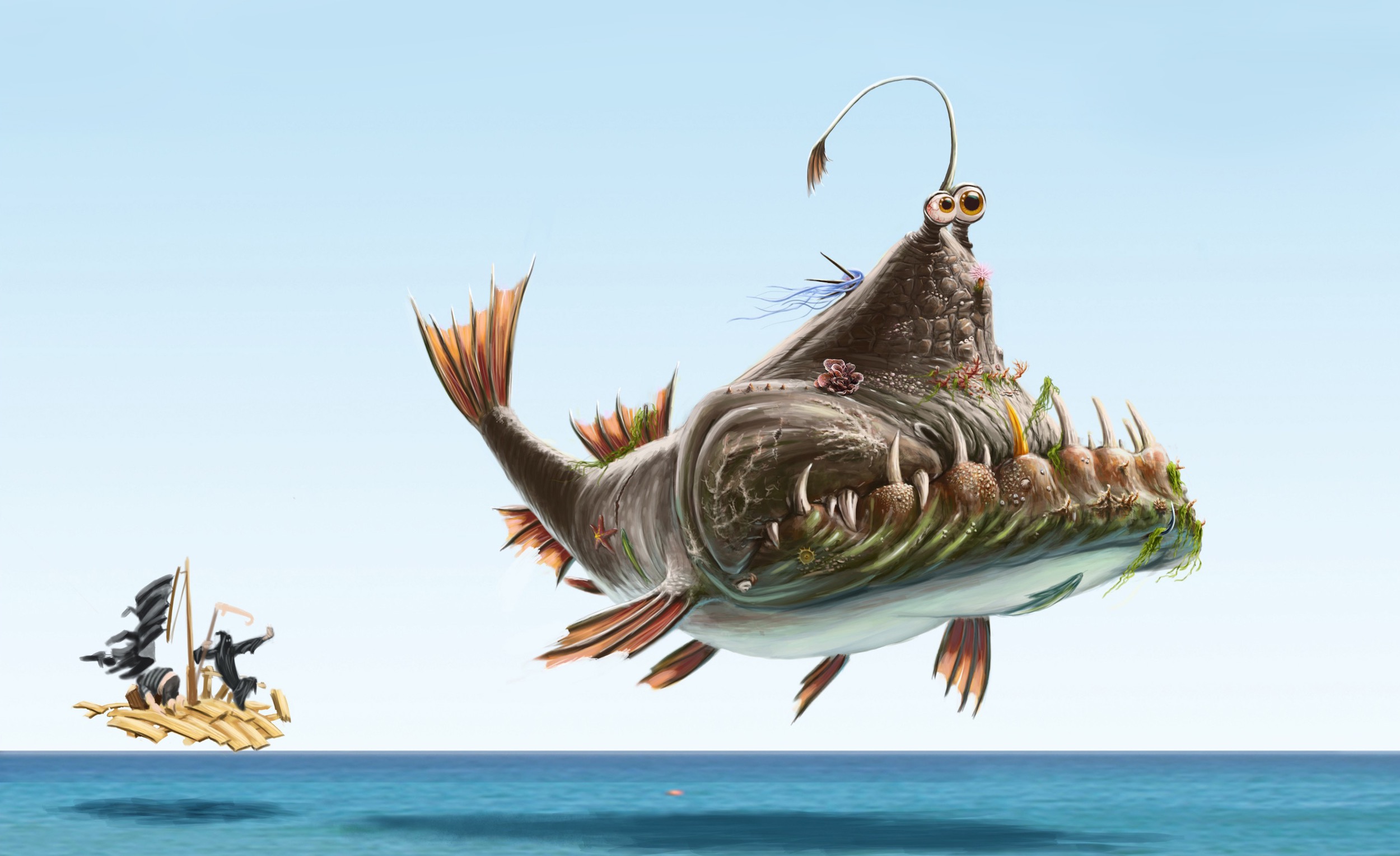 Here is the final 3D version of the fish:

We had another character – the small fish – which unfortunately didn’t qualify. A real prototype was the telescope eye fish (goldfish) with big eyes. Yes, it is a fish and not a device. 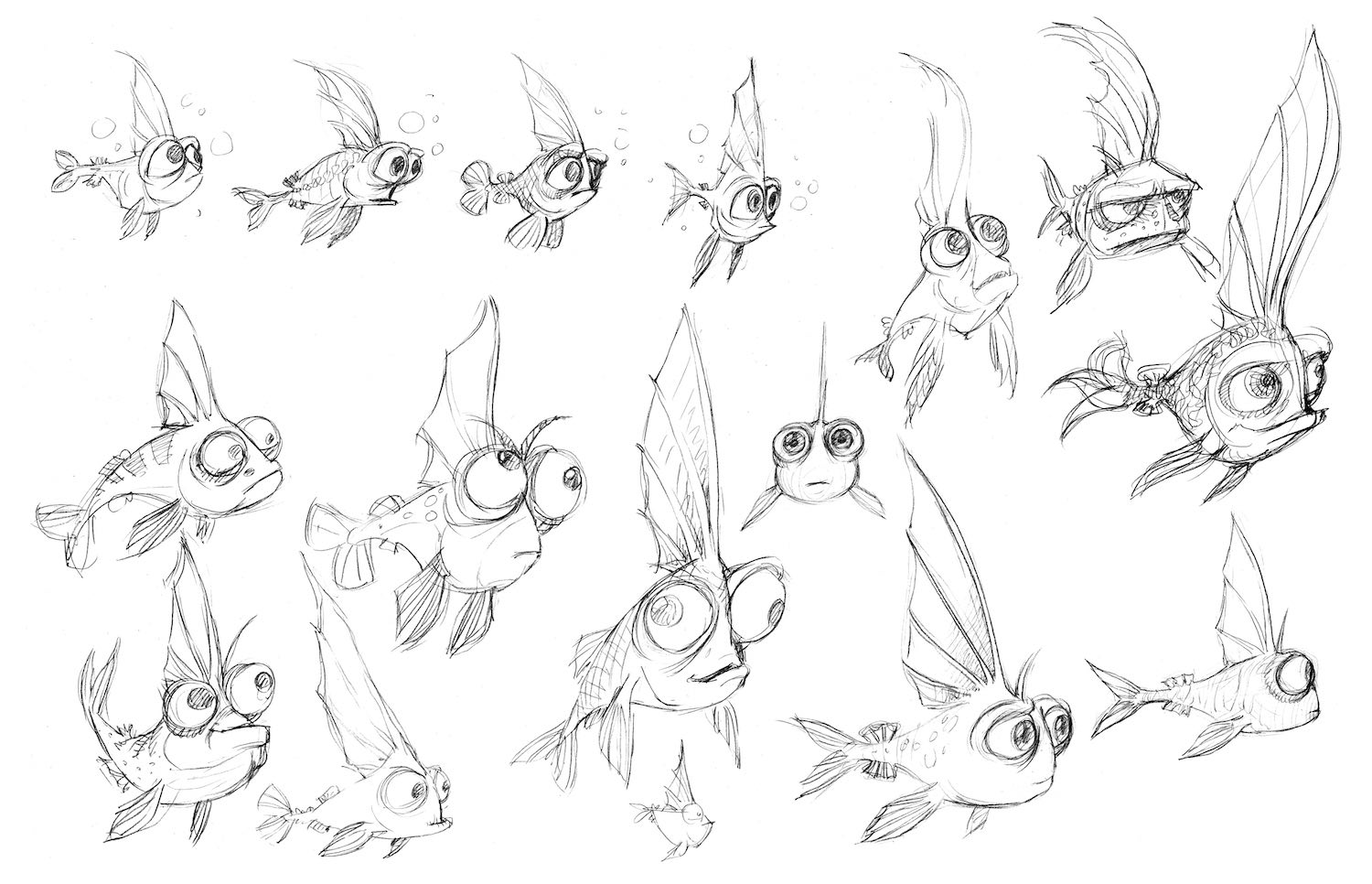 There you go. The little fish turned out cute, funny and silly. It is not perfect, because its left hemisphere does not coordinate with the right one. For this reason, its eyes may move independently, as the chameleon’s eyes.

This fish didn’t make it at the casting because it just dropped out of the cartoon history, so we decided to get rid of it by cooking it into a soup and drinking it with beer. 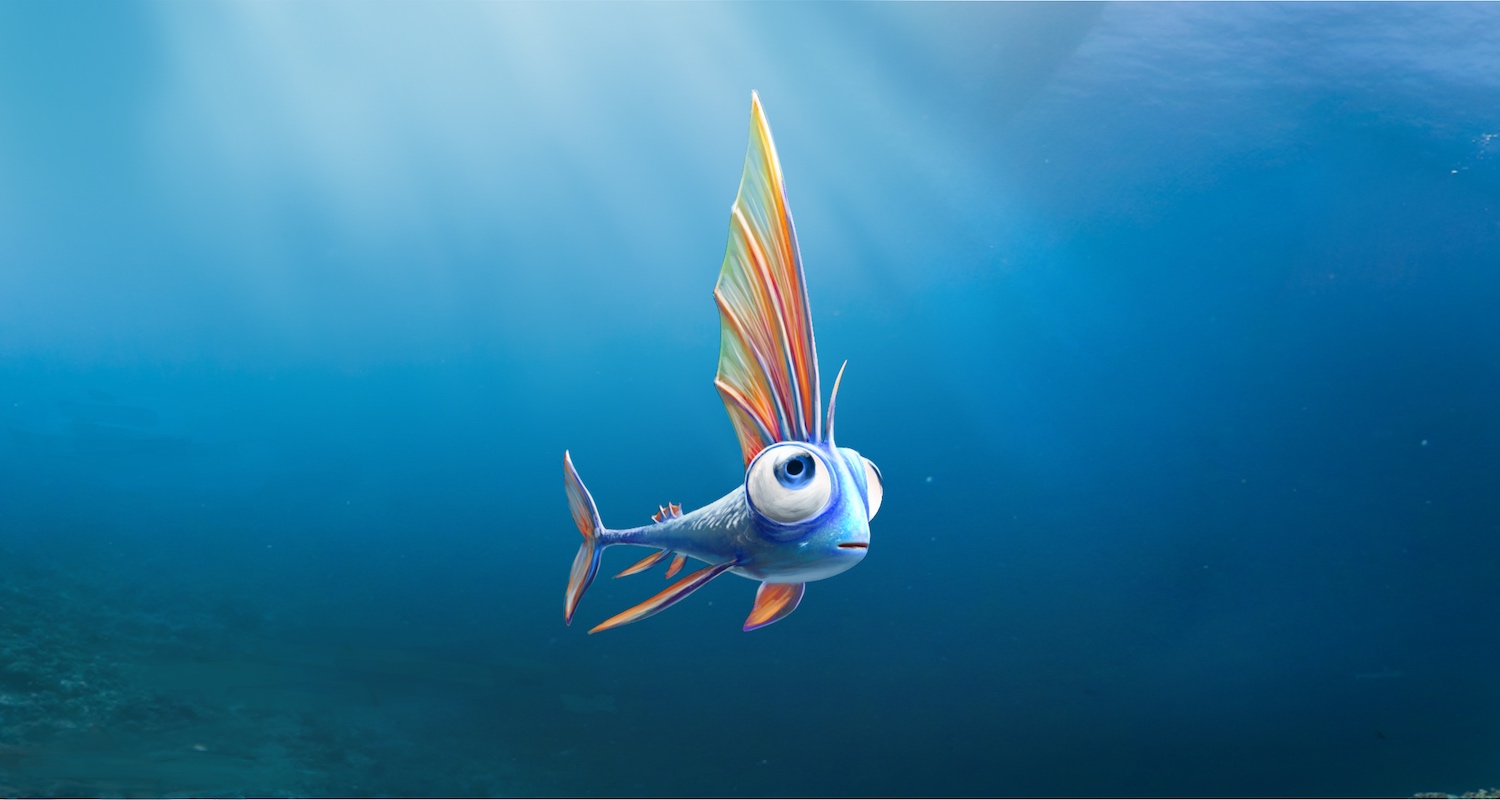 But the official version is different: the little fish didn’t participate in the animation because it had crazy rider conditions and it thought the salary was too little 🙂 Though it accepted these conditions from the beginning. 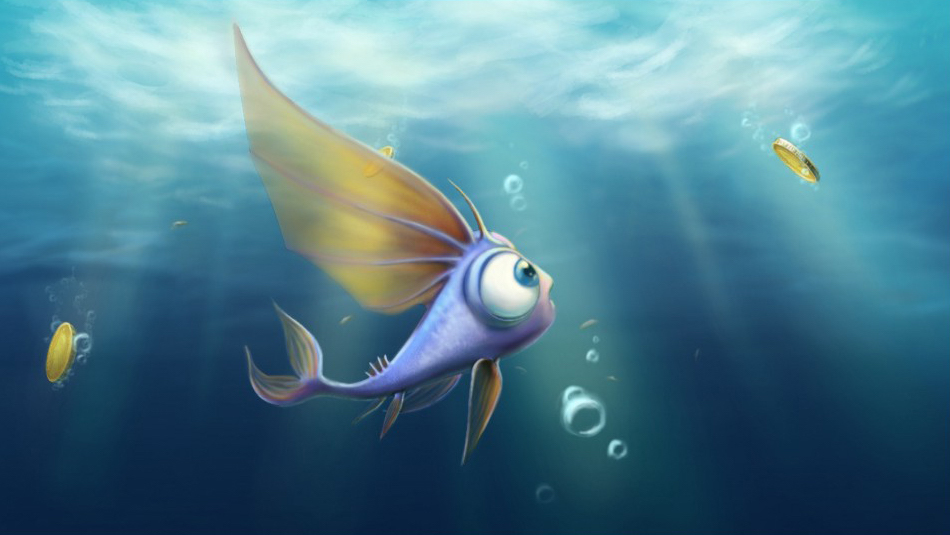 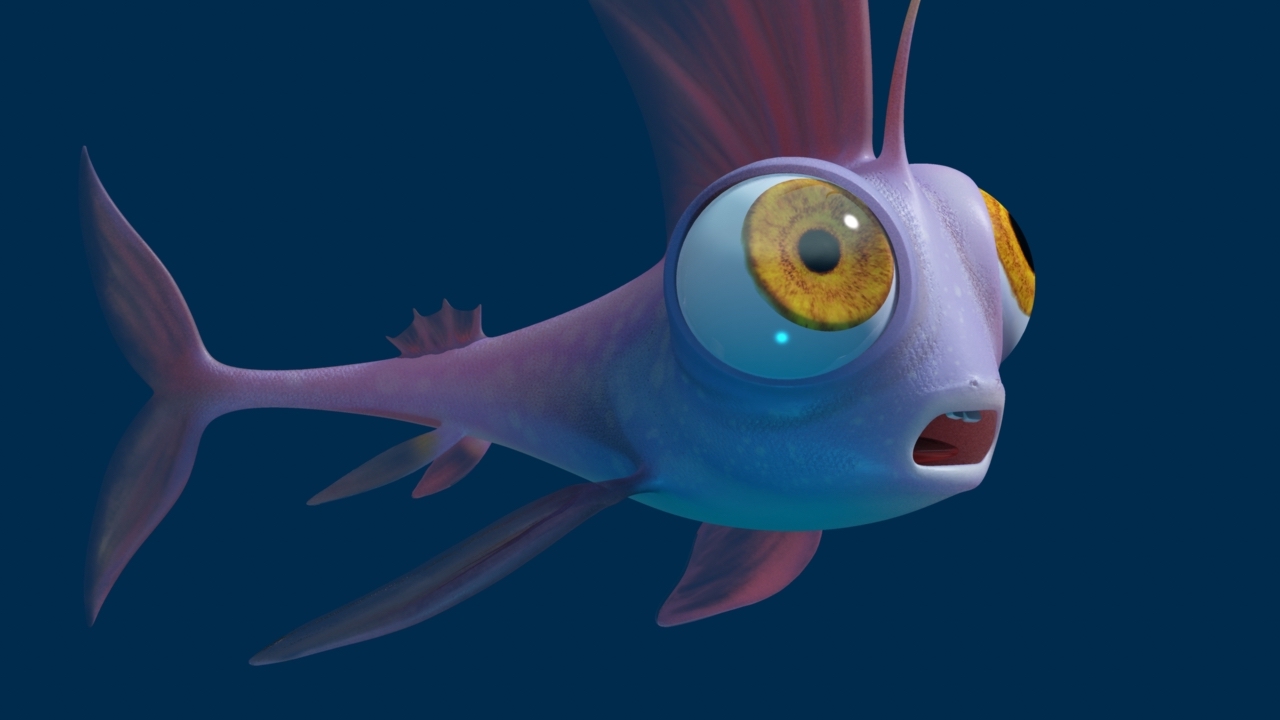 If the starfishes and jellyfishes “fly” and stick to the hoodie, it means this is the way it should be. The classics claim that. 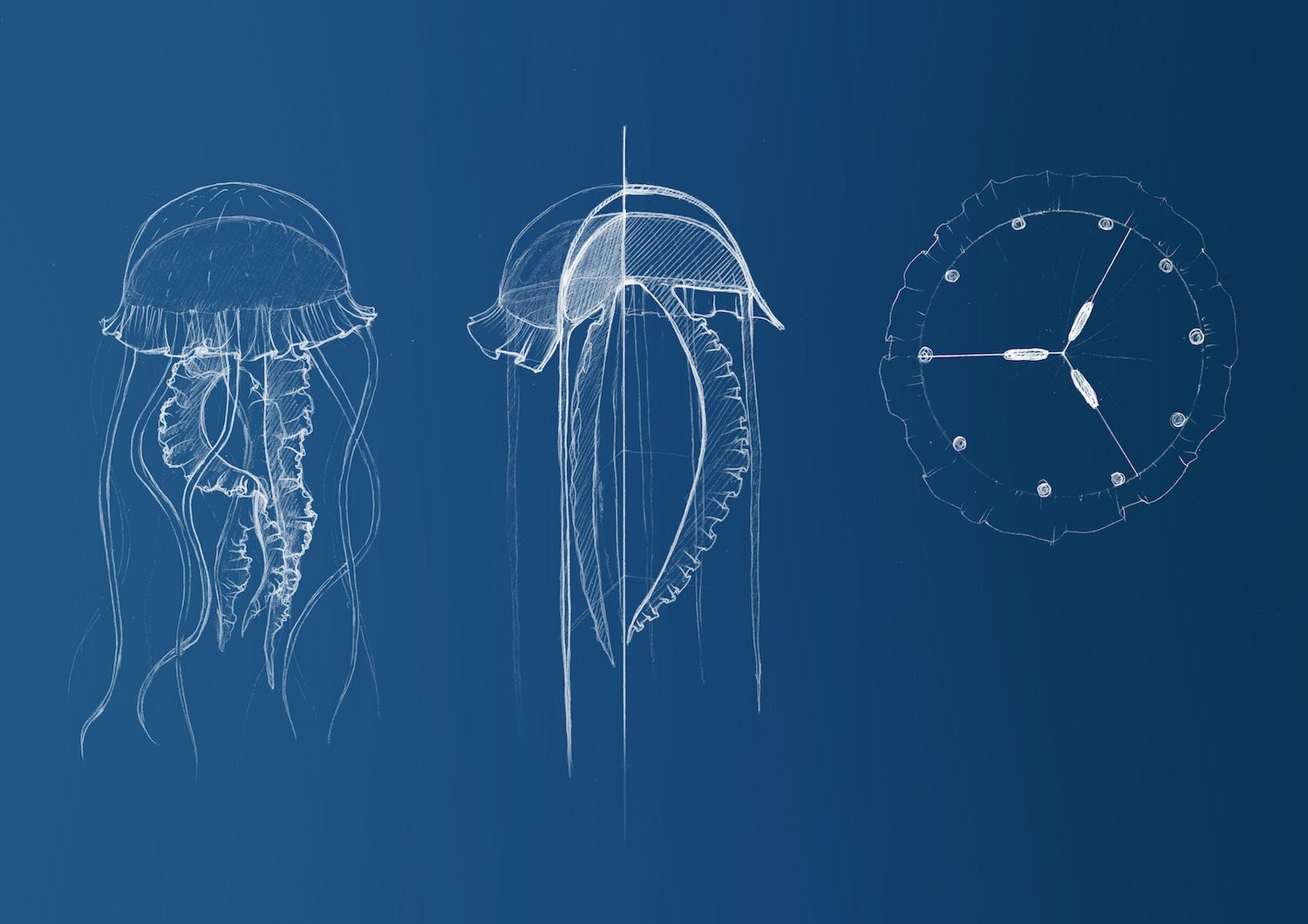 In our case, these secondary characters appeared during the filmmaking process, and not at the beginning. 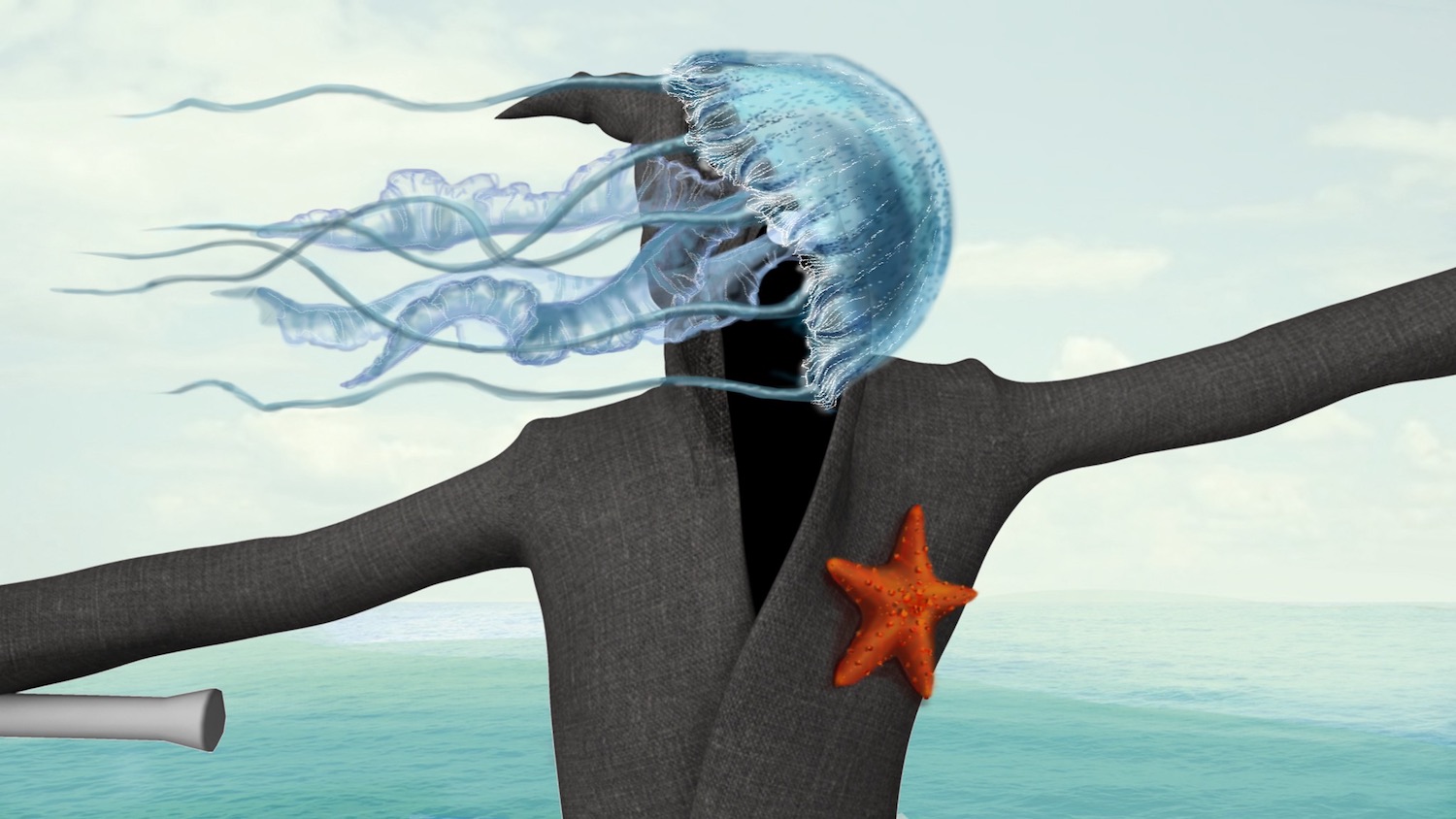 On the small raft

In our opinion, a genuine raft has to be made of beams, mast and sail (canvas).  And since it’s a pirate raft, the flag has to be adequate. We don’t know how much time the pirate used to get the raft built. But we can tell how long it took us to draw it!

Our engineers calibrated every inch of this construction. The raft was designed in cross-sections, ¾, etc. We liked the outcome and we decided the raft may hold 2 characters, so we placed the pirate and waited until someone would come visiting the poor guy.

We had some rough times designing the chest because we didn’t know what treasure to place in it. Some members of our team insisted on putting gold and jewelry in it, others claimed that the real treasure is a good job and the family. But we didn’t know how to put in the family and the job, therefore, we chose the other option. 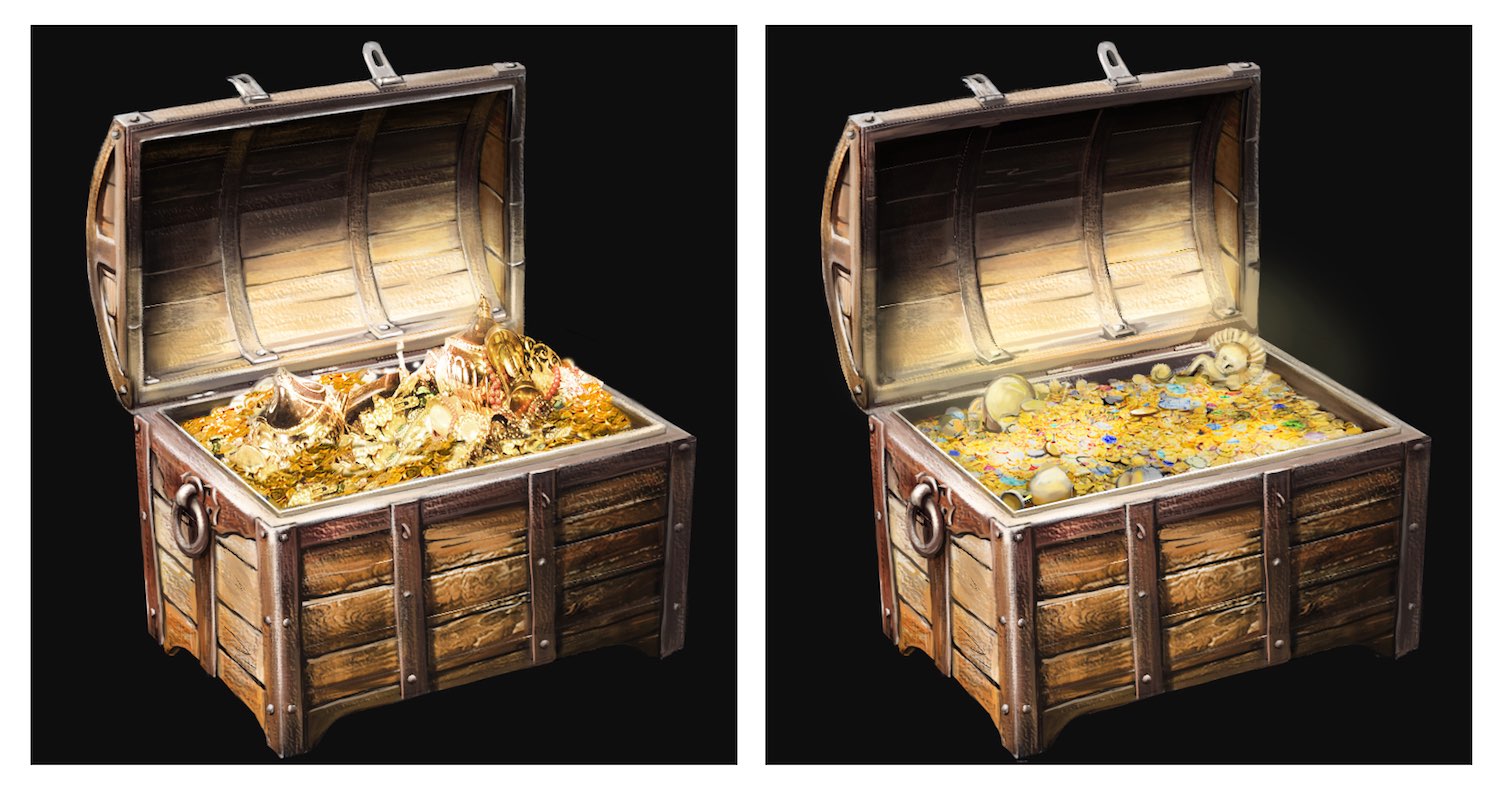 The chest is stuffed with golden piastres, which may serve as a bait for the giant fish. 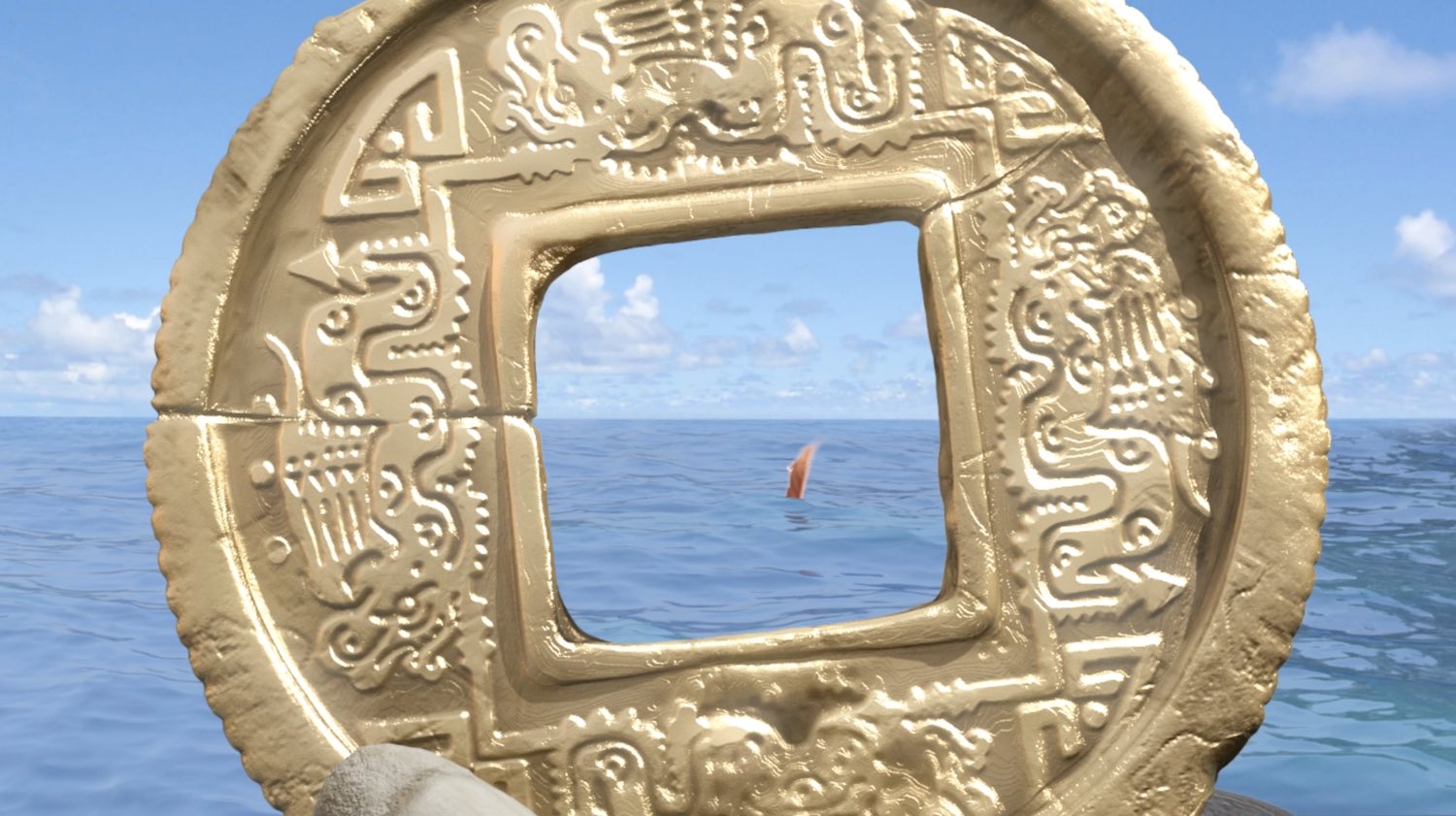 What does a person who’s dying of thirst and lying on a raft dreams of? That’s right, he dreams of a green island and a pint of cold beer. Do you want it? You can have it! You’ll do it all for the sake of a good plot. So, an island with a lighthouse arise in the middle of the ocean.

Well, and the pint of beer may be found in the tavern, which is the place of salvation for the pirate and for the local population as well.

Despite the constant heat (the action takes place in tropics), there is darkness and freshness in the tavern. While the local residents were building the lighthouse, this tavern welcomed them under its 3D roof, to the 3D tables and chairs. So that’s the place where Sam will get a touch of his second life. 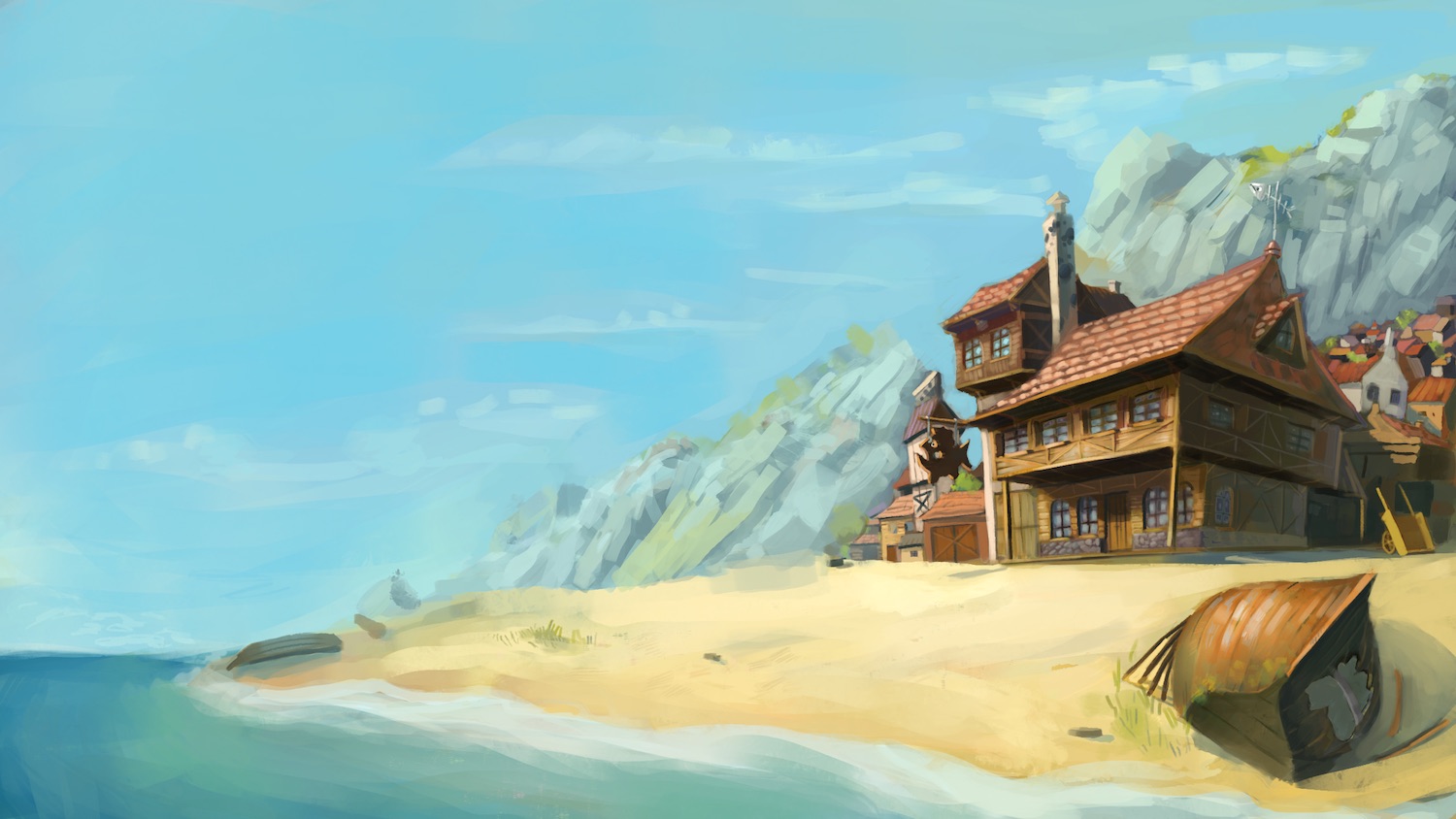 The creation of clouds is another topic. In the cartoon, the horizon is not entirely wrapped with clouds, which means 50% of the screen is covered by the sky. Consequently, we started looking for the “appropriate” clouds beyond the Moldovan borders. The cartoon director climbed the mountains to get the best refs. The clouds were being redrawn: they transformed either in cumulus, either in cirrus, then the sky stretched out, and then the clouds fell apart again. 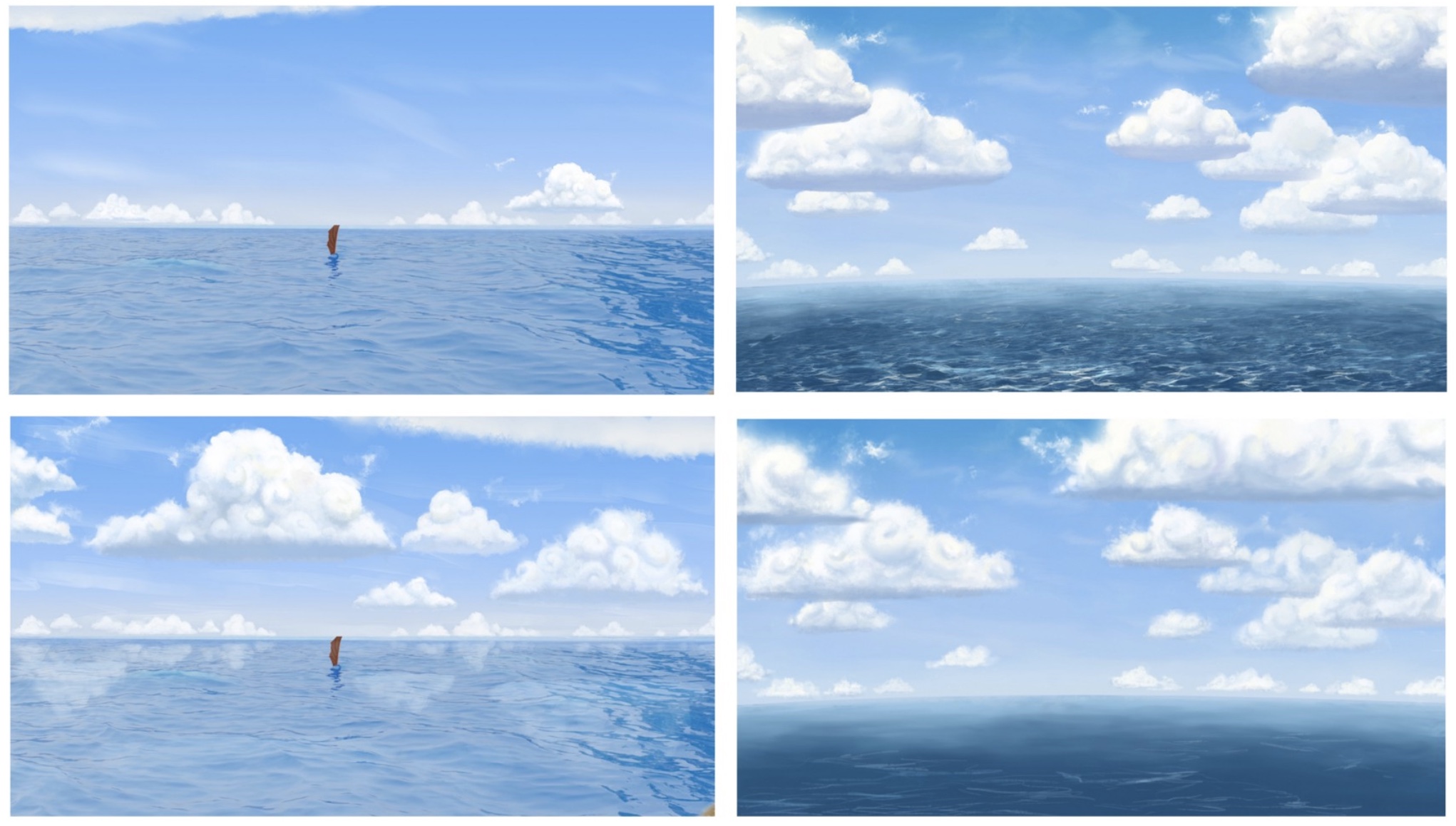 As a result of endless arguments, we found the desired option. The weather settled down, and the team’s mood improved. 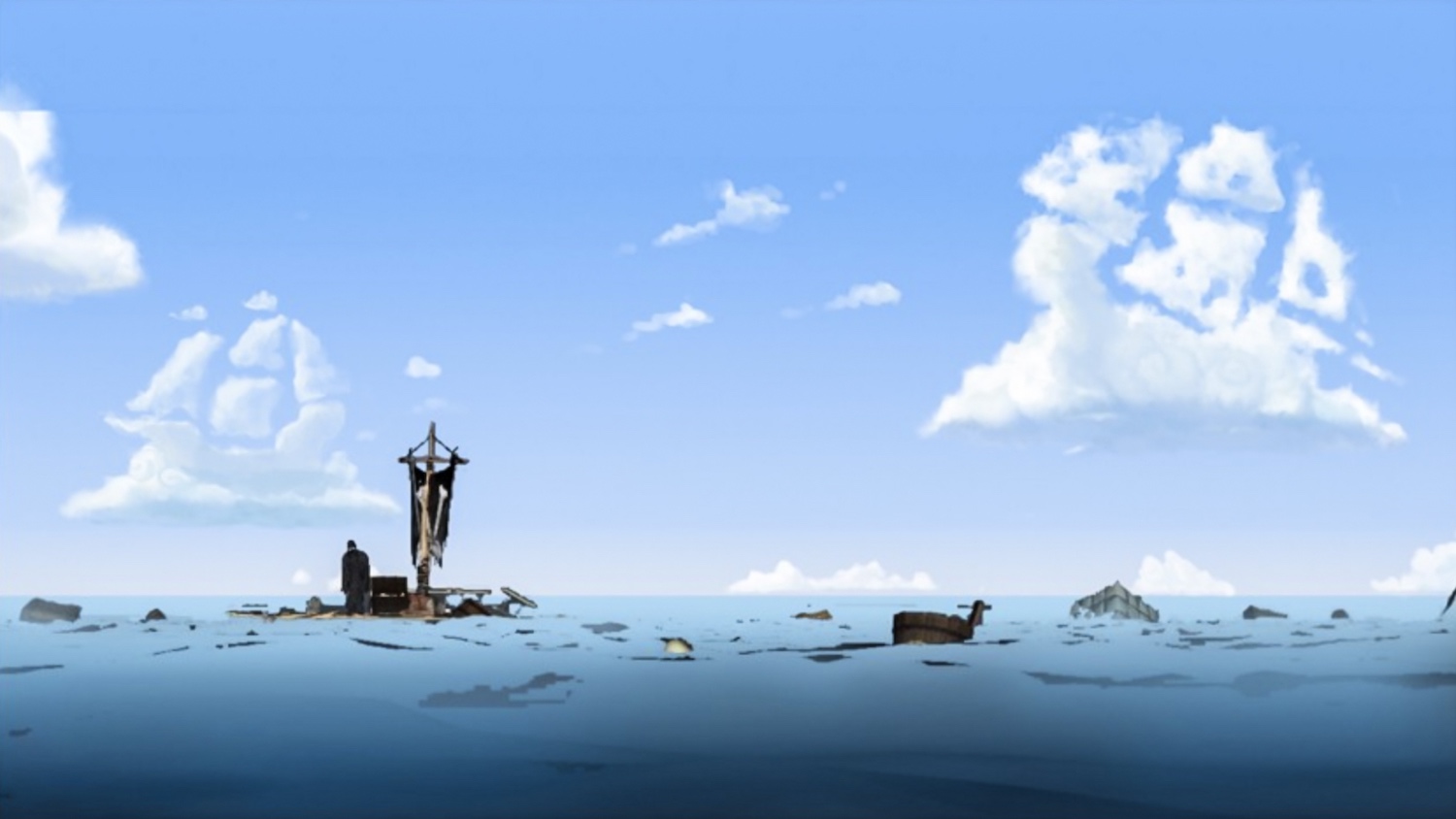 But that’s not all we needed to draw. There were many other details, such as: shipwreck, bottles, ropes, beer pints, even a parrot in a cage, and many others. 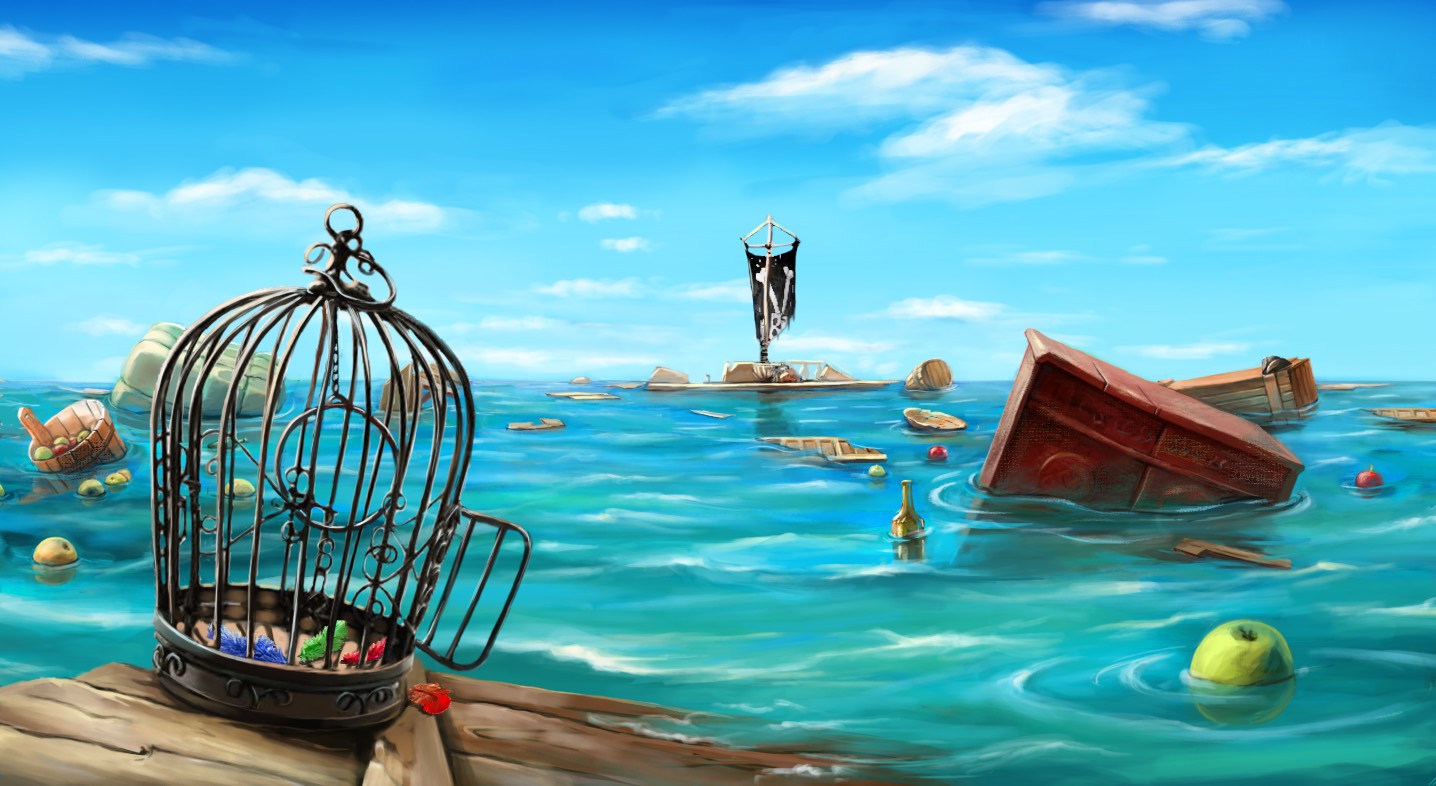 Phew, it seems we drew everything… Is this the end? Nope. In the next part, we will tell you what we encountered during the creation of animatics, rigging, animations and simulations. There is a lot of “tasty” and unexpected (at least for us) things. Well, the deeper into the wood you go, the more timber seems to grow.

How “Death Sails” was made. The ocean, the skeleton and beer.

7 years of pain, which I’m grateful for.